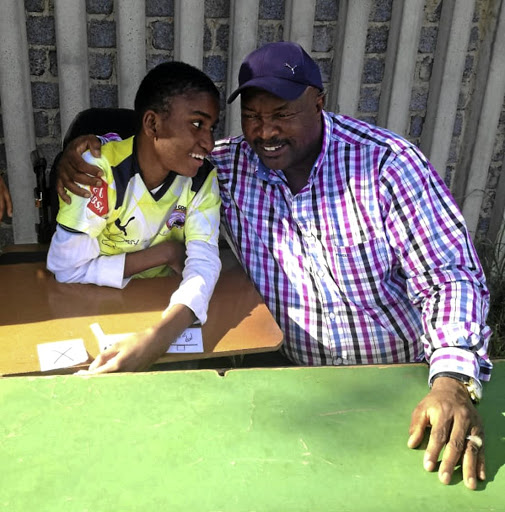 Some people get past their sell-by date as they grow older but the 63-year-old "Black Prince" of South African football still digs out even the invisible talent.

The man, whose dribbling and passing skills are yet to be emulated, was at his best
last week.

He did not only charm but also brought hope for 16-year-old Qhayiya Ngcaku from Rosettenville, south of Johannesburg.

Qhayiya was confined to a wheelchair by TB meningitis in 2015 and can only hear and understands everything around him but just cannot talk.

His mother Zukiswa Ngcaku, originally from King Williams Town, in the Eastern Cape, took him to Rand Stadium playground which is Jomo Cosmos' training ground.

When Qhayiya saw Sono, he seemed to recognise him, judging by his laughter when his mother pushed his wheelchair closer to the soccer legend.

"Stop looking at me like I am your girlfriend," joked Sono, who is known for cracking jokes.

"I want you to concentrate on the training session because I want you to play football for Cosmos next year."

Sono then presented the jubilant boy with an autographed Cosmos jersey.

Speaking to Sowetan yesterday, Zukiswa said: "My son recognised Sono, judging by his laughter. The excitement was written all over his face. That made me happy to see him in that mood."

She explained further: "There are two things he loved at a very young age - PlayStation and soccer. That is why I went to the playground. But I did not know Sono, I saw him for the first time last week.

"The whole team took a picture with my son and he gave him an autographed jersey. Sono said my son can come and watch Cosmos train any time he wants."

She shared that: "Qhayiya was a normal child who played football for a Portuguese amateur team, Uniao, in Rosettenville, until 2014 when he was doing grade 8. He started complaining of constant headaches. Then in January 2015 I took him to doctors found out that he had TB meningitis." She said her son showed his emotions by laughing.

"Then you can tell that he is excited. He hears everything but just cannot talk," she said.