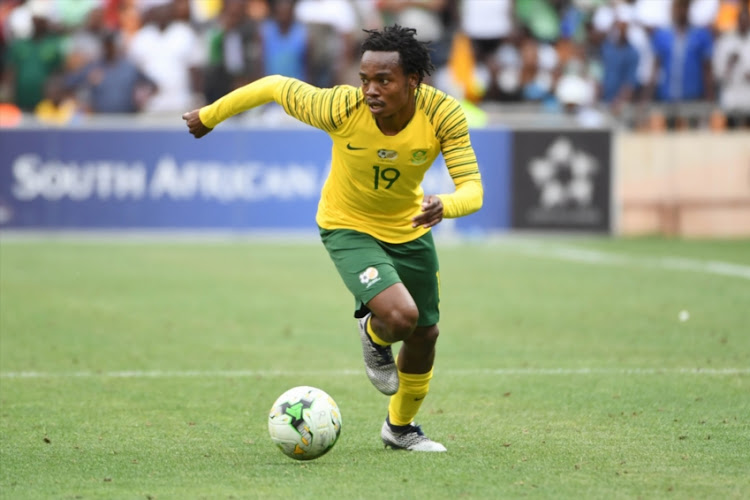 Percy Tau of Bafana Bafana during the match between South Africa and Nigeria at FNB Stadium on November 17, 2018 in Johannesburg, South Africa.
Image: Lee Warren/Gallo Images

Bafana Bafana coach Stuart Baxter was planning to take goal hero Percy Tau off before the end of Tuesday’s international against Paraguay in Durban but fortunately changed his mind to allow the Belgian-based striker to come to the country’s rescue again.

Tau delivered another man of the match performance for the country with a last-gasp goal for a youthful Bafana outfit against their South American rivals and allowed them to share the Nelson Mandela Challenge match at the Moses Mabhida Stadium.

“I wasn’t going to leave Percy on‚ I was going to take him off when we put on [Thulani] Serero‚ but I thought Percy was our main threat and I asked him to bear with me and stick it out.

"I just thought that if we were to have any hope in the game‚ we needed to leave him on‚” Baxter said.

Serero combined with Tau to set him clear of the offside trap and allow him to finish with virtually the last kick of the game after Paraguay had lead from the 31st minute of the match in wet conditions.

Tau had also set up the equaliser for Bafana in Saturday’s African Nations Cup qualifier against Nigeria at Soccer City after the home side went behind early in the match.

Baxter kept just four players from Saturday in Tuesday’s starting line-up as he took a gamble on the ability of many inexperienced players and he had planned to make more changes at half-time.

“I wasn’t going to leave Tyson [Thulani Hlatshwayo] on‚ I was going to let him and Buhle [Mkhwanazi] share the game‚ but after Ace [Motjeka Madisha] made the mistake [for the goal] and the crowd got on his back‚ and then he made another mistake‚ I didn’t think it was fair to leave him on.

“I spoke to him at halftime and told him that. He will have many more games‚ but he needs to learn from the mistakes he has made.”

Baxter said many of the Bafana players had “been to school” against Paraguay who were “uncharacteristically aggressive” for a South American side.

“For some of our younger players especially this was a learning curve and they needed to adapt quickly.

"I picked a lot of the young boys and if we had lost‚ I am sure you guys would have been at my throat‚ but the truth is they need to play against teams like this to learn‚” Baxter said.

“They went to school and the pleasing thing is they did it for 90 minutes and they kept going. We gave away an own goal against Nigeria and we kept going.

“We gave away a very poor goal against Paraguay‚ but we kept going and in both games we got back to 1-1. We need that sort of spirit.”