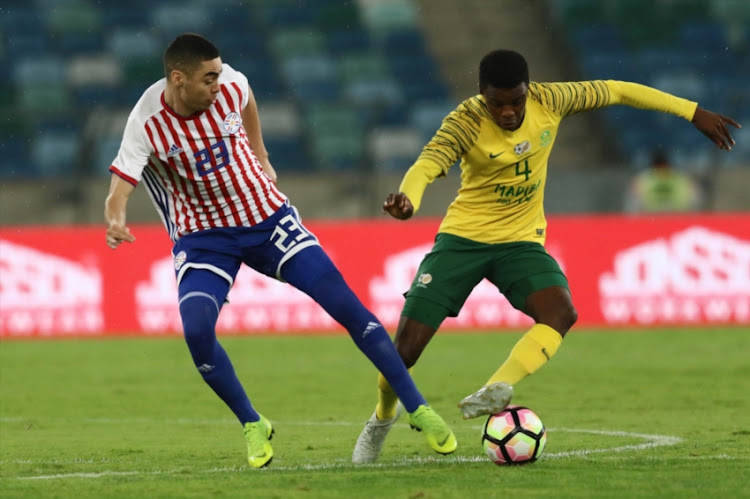 Percy Tau came to the country’s rescue again with a dramatic last gasp equaliser as Bafana Bafana shared the Nelson Mandela Challenge trophy with Paraguay at the Moses Mabhida Stadium on Tuesday as they forced a 1-1 draw.

Paraguay looked to be on their way to handing a young Bafana outfit a lesson in the realities of international football before Tau turned on his magic to score with virtually the last touch of the match.

The pass from Thulani Serero set Tau away to rescue the situation on a wet night in Durban just when it seemed the trophy would be leaving home soil.

The visitors were ahead after just the half hour and twice struck the upright and could well have had the game sealed at half-time.

But South Africa, with a much changed side from Saturday’s clash with Nigeria, took up the invitation to get back in the game, much to the relief of coach Stuart Baxter.

“We played a team that was very aggressive and it was going to school for a lot of our players. When we learnt, it was pleasing that we gave them problems,” he said afterwards.

South Africa had home hopes up quickly as Tau looked to pick up where he left off against Nigeria on Saturday and forced a fine stop from Paraguay’s veteran goalkeeper Antony Silva in just the second minute.

Tau buzzed around in the beginning and looked to be again displaying his star qualities, inspiring the much-changed Bafana line-up around him.

But Paraguay did not take long to find their stride and after 15 minutes Santander hit the upright as he burst through a static defence and rolled the ball past an on-rushing Darren Keet, only to see the ball bounce back into play off the upright.

At the other end there were half chances for Lebo Mothiba, Tau and Vincent Pule, whose long range effort whistled just wide.

But just past the half hour mark, Paraguay took the lead as Motjeka Madisha gave the ball away to Celso Ortiz, who then set winger Cecilio Dominguez down the flank and his shot was parried by Keet, with Santander on hand to easily tap home.

South Africa could have equalised five minutes later as Teboho Mokoena set up Pule on the left but his striker was parried away by Silva.

Three minutes after that Dominguez hit the upright again from a tight angle with Keet knowing very little about it and then Madisha made another horror error to give Santander another chance to score, but his effort rolled just wide.

The half time break saw four changes on either side but fresh legs failed to spark the half to life initially.

With some 15 minutes left, Bafana got some combinations going with Tau and substitute Fortune Makaringe coming close to an equaliser.

Tau did have the ball in the net with five minutes to go but he was just offside as Serero threaded through a sharp pass, but minutes later the pair got their timing right to score.