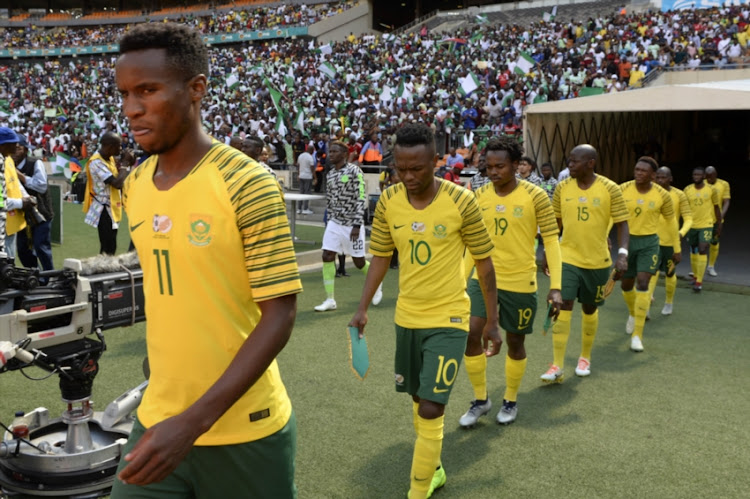 Themba Zwane of Bafana Bafana during the match between South Africa and Nigeria at FNB Stadium on November 17, 2018 in Johannesburg, South Africa.
Image: Lee Warren/Gallo Images

The SABC has confirmed that Tuesday night's Nelson Mandela Challenge between Bafana Bafana and Paraguay will not be broadcast live on the public broadcaster’s platforms.

The national broadcaster also failed to broadcast the crucial 2019 Africa Cup of Nations (Afcon) qualifying match between Bafana and Nigeria at FNB Stadium on Saturday.

Banyana Banyana's ongoing Afcon campaign in Ghana will also be blacked out.

Sunday’s morale-boosting and historic 1-0 opening match win over defending champions Nigeria in Cape Coast was not on the SABC platforms.

“It is regrettable that the public broadcaster is unable to broadcast the national team’s games at this stage‚ due to the SABC and the South African Football Association (SAFA) not being able to reach a new agreement‚” the cash-strapped national broadcaster said in a statement on Tuesday.

The blackout on the SABC platforms is a result of the continuing war of words between the SA Football Association (Safa) and the public broadcaster.

SABC and Safa are at loggerheads because of monetary valuation of broadcast rights to national teams’ home matches.

The SABC has been paying Safa R110m for the broadcast rights to the Bafana‚ Banyana and junior national team matches for the past three years.

But the cash-strapped public broadcaster offered just R10m for the same rights for a new deal after the initial contract expired in April this year.

The SABC is sticking to its offer of R10m while Safa continues to reject it outright.

“The SABC remains committed to engaging SAFA on fair terms in dealing with this impasse‚ as the SABC takes its role of broadcasting Bafana Bafana games to the South African public seriously‚” reads the SABC statement.