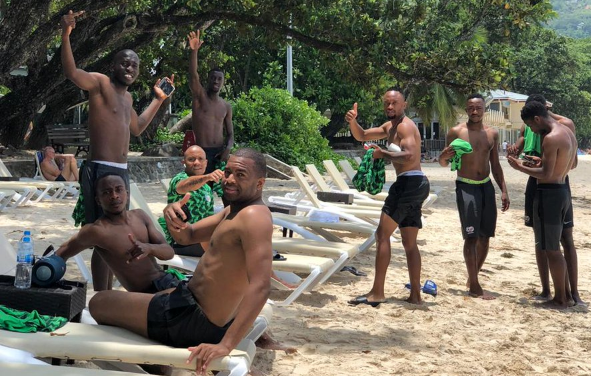 Relaxing Bafana Bafana at the beach in Seychelles ahead of their second leg match 2019 Africa Cup of Nations qualifier.
Image: Bafana Bafana/Twitter

Stuart Baxter has admitted that the official Bafana Bafana Twitter account's decision to post pictures of the players frolicking on the beach in Seychelles on the eve of Tuesday's 2019 Africa Cup of Nations qualifier was not the best.

The pictures came back to haunt Bafana after Baxter's charges were held to a dispiriting 0-0 draw by the unheralded islanders who are ranked 189th in the world.

“Our hotel was on the beach‚ so when guys went for a walk they went straight to the beach‚” Baxter said after arriving back in SA on Wednesday.

“I don’t think that needs to be exaggerated‚ maybe their choice‚ judgment or timing was not the best but I will definitely say those pictures were taken in between meetings and training.”

The players looked to be in holiday mode in the pictures but Baxter dismissed suggestions that they approached the game in a similarly casual manner after beating the selfsame Seychelles 6-0 at FNB Stadium three days earlier.

“The lads’ attitude in the dressing room was spot on because we knew that they will be fighting tooth and nail and they will try to frustrate us.

"I honestly don’t think the boys were complacent‚ they were ready for it.

"It was very frustrating‚ very difficult but they kept going and we just did not have enough quality on that pitch at the right times.

"If we had‚ we would have won the game.”

“I don’t know how many times their players went down.

"I have to say again that my frustration was the refereeing.

"When you see Percy Tau’s goal‚ was that off-side?

"Their goalkeeper threw himself on the ground when we were just about to put the ball into the back of the net and the referee tells us that we have to stop the game.

"If the keeper has a head injury maybe but not when the goalkeeper realise that I am in trouble and rolls over.”

Bafana play their penultimate 2019 Africa Cup of Nations qualifier at home to group leaders Nigeria at FNB Stadium in Johannesburg on Saturday November 17.

No-one expected it but the reality is that Bafana Bafana were held to a goalless draw by Seychelles in a 2019 Africa Cup of Nations qualifier here on ...
Sport
3 years ago

Relaxed Bafana Bafana take in the sights in Seychelles

Such is the relaxed nature of Bafana Bafana's approach to their 2019 Africa Cup of Nations qualifier against the Seychelles that beach trips will be ...
Sport
3 years ago

The Bafana Bafana Twitter account’s decision to post pictures of the players frolicking on the beach in Seychelles this week has become a nightmare ...
Sport
3 years ago
Next Article