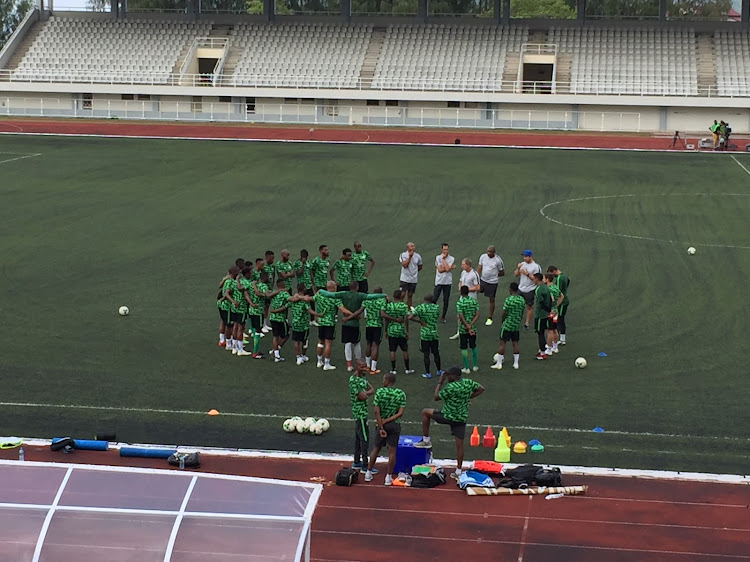 Bafana Bafana during their training session ahead of their second-leg Seychelles at 10 000-seater Stade Linite.
Image: Tiyani Wa Ka Mabasa

There’s a sound warning and it comes from Bafana Bafana coach Stuart Baxter ahead of the 2019 Africa Cup of Nations qualifier against Seychelles here on Tuesday (3.30pm SA time).

Four days after Bafana recorded a 6-0 win over The Pirates‚ as the islanders are known‚ at FNB Stadium on Saturday‚ Baxter's charges have to do it all over again.

But it appears to be going Bafana’s way.

Not only did they fly directly to the Indian Ocean island three days ago‚ Seychelles had to take a long road home having had to connect in Nairobi‚ Kenya.

Bafana have generally been enjoying some good treatment on this foreign soil and even found time to take a stroll on the beach.

You’d swear Bafana are world-beaters and to be fair‚ even the Seychelles players are not royalty here.

While Bafana arrived for training on Monday in a bus‚ albeit small‚ the Seychelles players drove in their own cars‚ most getting lifts from their teammates.

Bafana were first on the ground and Seychelles waited outside.

The whole scene was reminiscent of a Sunday league.

The only difference being that they were all in the same training kit‚ but all over the place.

You’d think Baxter should not even be worried about the hosts‚ but he is and he has his reasons.

Baxter insisted that winning here may not come easy despite the big victory back home just days ago.

He’s quick to remind South Africans that the Stade Linite‚ the 10 000-seater match venue‚ is nothing like the FNB Stadium where Bafana‚ on a world class surface‚ could easily put together passes that led to six goals and SA’s record win since re-admission to international football 26 years ago.

Baxter’s concern stems from the artificial pitch‚ which has seen better days and the ball bounces at will.

It’s not the best of fields for a passing game and the Briton wants his midfielders to guard against Seychelles picking their way through the middle‚ the same way they created two big chances before losing 3-0 to Nigeria early last month.

“The pitch is not great and the lights are not great‚ but it doesn’t really matter‚ because we have to take the points and it’s as simple as that‚” Baxter continued.

“We have to make sure we have the patience. Maybe we don’t score in the first five minutes and maybe it takes half an hour.”

But Baxter is buoyed by the support he’s received from PSL coaches‚ who he said were impressed with the way Bafana played at home.

“I got a lot of very nice messages from the coaches in the PSL‚ you know‚ saying that’s the way we love to see South Africa play; moving the ball quickly with some combinations and that’s the way I see us playing‚” Baxter added.

If Bafana can repeat that performance at home‚ Baxter’s phone could be ringing non-stop and most importantly‚ Bafana could be on the brink of qualifying for the tournament to be hosted by Cameroon.