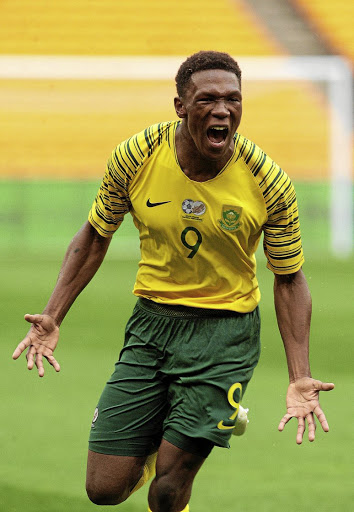 Bafana striker Lebo Mothiba celebrates after scoring during the 2019 Africa Cup of Nations qualifier against the Seychelles at FNB Stadium on Saturday. SA earned a record-setting 6-0 victory over the islanders.
Image: Veli Nhlapo

Despite the record-setting victory at the weekend, new Bafana Bafana sensation Lebo Mothiba still feels there are aspects of his team's performances that need to be polished.

Bafana recorded their biggest victory when they annihilated the Seychelles 6-0 at the FNB Stadium in a 2019 Africa Cup of Nations qualifier.

They bettered their 5-0 win against Guatemala in the build-up to the 2010 Fifa World Cup.

Speaking at the OR Tambo International Airport before the team flew out to to the island yesterday for the reverse leg, Mothiba said: "I am very happy to have scored three goals in three games for Bafana. So far I am enjoying myself and having a great time with the guys.

"We should now work more on our finishing and be a little more clinical in front of goal."

Mothiba grabbed the third goal while an own goal from Nigel Nigel and strikes from Thulani Hlatshwayo, Dino Ndlovu, Percy Tau and Teboho Mokoena rounded up the win.

Fans are salivating at the prospect of a ruthless combination with fellow striker Tau. The 22-year-old attacker says his relationship with Tau is developing on and off the field.

"We [himself and Tau] are working a lot at training and talk a lot. We listen to the coach's instructions and so far everything is going well," the France-based lad said.

"So for us it's just about working hard and if we keep communicating then we can make it grow."

After a disappointing goalless draw with Libya in their previous encounter, the fans largely staged a stayaway for the Seychelles clash. The pouring rain also kept them away.

The former Lille goal poacher conceded that he would have liked for the team to receive better support.

"It would have been nice if there were more fans to give us motivation, but without any fans we can still play."

At the Stade Linite tomorrow, the team will be out to deliver another emphatic performance.

"We will go there and do our best. Because it's an artificial turf, they are used to it but we must just go out there and make it difficult for them."