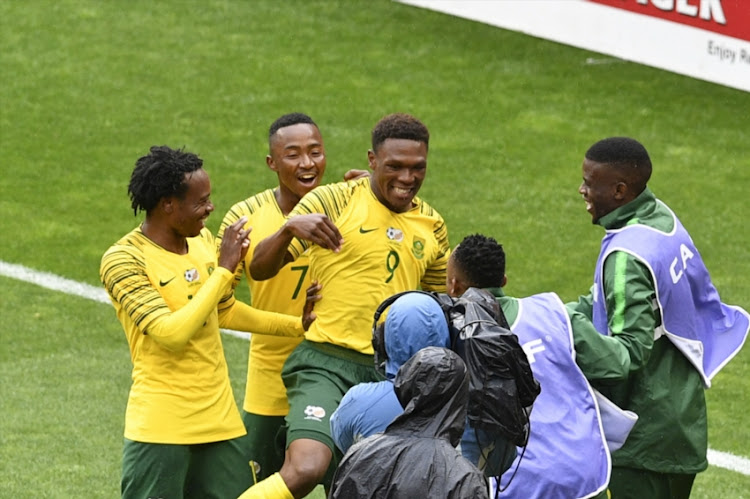 Bafana Bafana improved their chances of going to Africa Cup of Nations in Cameroon next year when they trashed minnows Seychelles 6-0, with three quick first half goals setting up an easy win at a rain-soaked FNB Stadium.

Bafana’s victory, the biggest in a all matches, took them top of Group E with seven points - three ahead of Libya who were to meet Nigeria away in Uyo in a game which kicked-off a few minutes after the Bafana game yesterday.

The 6-0 score-line bettered what Bafana did when they beat Gautemala 5-0 in June 2010 in what was a World Cup warm-up friendly in Polokwane.

The heavy pitch made things better for the visitors as Bafana struggled to push the ball around the way Bafana coach Stuart Baxter had promised the team will have to deliver against a team which last won three years ago.

With pressure of winning weighing heavily on Bafana players after their timid goalless draw against Libya in Durban last, the team started the game nervously and missed a couple of gilt-edged opportunities before Seychelles defender with a unique name, Nigel Nigel, helped the home side break the ice with an outstanding own goal in the 23rd minute.

The goal came as a result of the pressure which was pilled by Bafana against a team which defended with 10 man and had nothing play for after losing both their opening matches away to Libya (5-1) in June last year and at home against Nigeira (3-0) last month.

Nigel headed in his own net while trying to clear Thulani Hlatshwayo’s headed cross inside the area after linking up well with Kamohelo Mokotjo, who had a stellar game alongside Dean Furman in the middle of the park.

Barely two minute had elapsed when Bafana doubled their lead, this time the Bafana skipper Hlatshwayo scoring himself after connecting well with Aubrey Modiba, another Bafana player who had a good match playing on the left side of the midfield.

To their credit Bafana didn’t take their foot of the pedal after Hlatshwayo’s goal and their pressing game again paid off when the French based striker Lebo Mothiba scored his third Bafana goal in three matches - confidently thumping it home after turning a defender inside out inside the area after receiving good supply from livewire Modiba.

Bafana were guilty of not increasing their goal tally in the second half, the main culprit being Mothiba’s striking partner Percy Tau, who missed several chances before getting his second qualification goal in the 74th minute before Dino Ndlovu and Tebogo Mokoena wrapped up the scoring in the 81st and 92nd minutes..

Tau, who was also unlucky not open the scoring with a free kick that hit the upright in the first half, finish with aplomb after getting an assist from Mothiba.

The former Mamelodi Sundowns striker also scored against Nigeria in Uyo when Bafana won 2-0 in their opening qualifier in June last year.

Not getting as many goals in this match may come back to haunt Bafana in terms of goal difference in case they finish on the same number of points with either Nigeria or Libya, the other teams capable of pushing Bafana to the last match in this group.

As much as Bafana played very well in the first half and did well to get the goals, their second performance was marked by a number of misses that could have seen them easily winning this match with double figures.

Bafana will almost seal their qualification for Cameroon if they double their wins over the 189 ranked Indian Ocean islanders in the return leg at the Stade Linite in Victoria on Tuesday.

After the Seychelles on Tuesday Bafana will host Nigeria in Johannesburg on November 16 before fishishing their qualifiers with Libya in March next year.