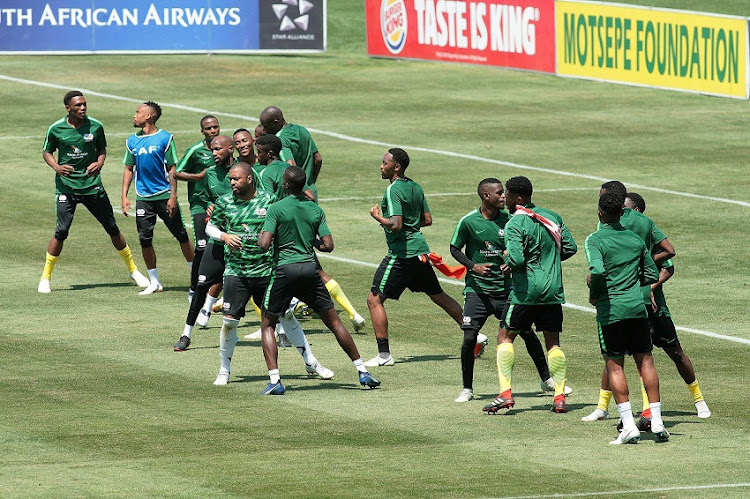 Bafana Bafana during the training session in preparation for the 2019 AFCON qualifier clash against Seychelles. The first leg match will take place at FNB Stadium on Saturday.
Image: Veli Nhlapo/Sowetan

Bafana Bafana’s use of the fields of the school that services the luxury Steyn City housing estate as a training venue this week ahead of their Africa Cup of Nations qualifier against Seychelles has raised eyebrows.

However Bafana coach Stuart Baxter has said the fields were the best Bafana could find from a technical aspect to match the fast movement of the ball SA will try to employ on Saturday at FNB Stadium.

Steyn City‚ in Midrand‚ just north of affluent Fourways‚ is one of Johannesburg’s most expensive housing estates.

Properties can range in price from a two-bedroom apartment at R3-million to five bedroom house for R25-million.

For Bafana‚ who trained at Princess Magogo Stadium in the township of KwaMashu for their last match – the 0-0 Afcon qualifying draw against Libya in Durban last month – it does not seem a setting that encapsulates taking the game to the people.

Apparently Baxter and South African Football Association (Safa) technical director Neil Tovey were behind the decision to use Steyn City’s adjoining school as a training venue.

Baxter has shown himself out of touch in the past with the message sometimes sent out by his decisions – such as the unpopular appointment of Quinton Fortune as an assistant-coach‚ or his son‚ Lee Baxter‚ as a replacement goalkeeper-coach against Libya.

The coach appeared irritated by the question of why Steyn City had been chosen‚ when Johannesburg has many soccer pitches with quality surfaces.

He said‚ on technical grounds‚ the fast surface at Steyn School was the motivating factor‚ as Bafana are preparing for a fast-paced‚ mobile game against Seychelles at FNB.

“The surface is the best that we can get. I’ve asked them to water it so it’s fast‚ and I want to play a fast game against Seychelles because they may not be able to keep up with that tempo‚” Baxter said.

“We have a failing at times that even though we can‚ we don’t drive the tempo‚ and then people can get behind the ball and we have to pick our way through them.”

On the message that training at affluent Steyn City might send out‚ Baxter said: “About taking the game to the people‚ I haven’t really got a clue what that is.

“England go and train at Arsenal‚ or they got to St Georges [Park‚ England’s training centre]. They lock themselves away and you can’t get anywhere near their team for two weeks before a game.

“So taking the game to the people? Well of course we can. We can go and train in the townships on a bad pitch‚ and then we can have lots of people who think we’re very clever.

“But then when we lose the game they won’t be very kind to us at all.”

The choice of Steyn City School may have raised eyebrows‚ but the facility‚ and especially the pristine pitch‚ is world class.

Groups of young primary school children have gathered on the banks overlooking Bafana’s training field to watch their sessions.

The school’s operations manager‚ George Cockeran‚ said the choice of their field by Bafana was an honour and a big boost to the profile of new institution‚ which openly opened its doors in January.

Currently Steyn City School comprises a pre-primary and a primary school‚ with a high school being built. It has 200 pupils at the moment.

Soccer is played at the school‚ with currently three brand new fields‚ and more being built.

“Soccer is probably our main sport at present‚” Cockeran said.

Cockeran said Safa came to notice the school’s facilities when it hosted an internal tournament for the Steyn City estate‚ and one of the Bafana technical staff were present.