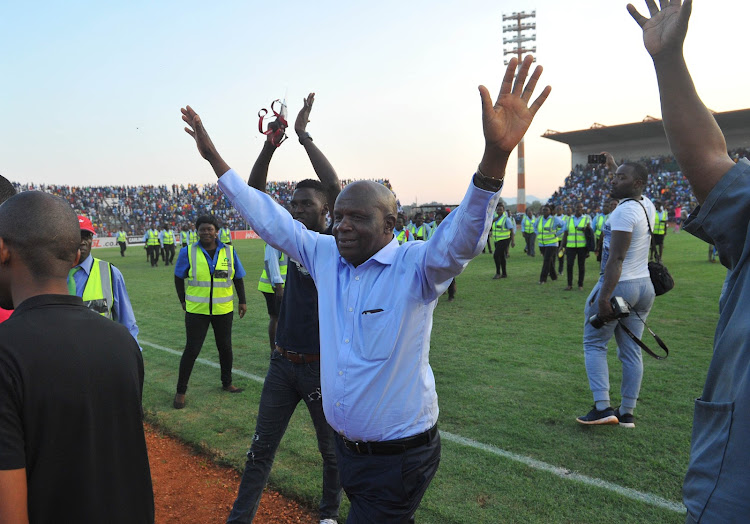 Black Leopards ownder and chairman David Thidiela celebrate with the fans in the stands after his team won promotion to the Premier Soccer League (PSL) at Thohoyandou Stadium on May 30 2018.
Image: Sydney Mahlangu/BackpagePix

The Premier Soccer League have suspended Black Leopards chairman David Thidiela from their executive committee (Exco) and referred the matter of his tirade against referee Victor Hlungwani to the league’s prosecutor, Nande Becker.

The decision to suspend Thidiela was taken at a meeting of the PSL’s Board of Governors (BoG) at Emperors Palace Hotel and Casino in Kempton Park on Thursday.

The PSL’s BoG also discussed the league’s dispute with the SA Football Association (Safa) over a new sponsorship of referees by the association with OUTsurance.

The PSL said in a statement on Thursday that, in addition to deciding to take the OUTsurance dispute to their lawyers, Thidiela had been suspended.

“The Board of Governors also discussed the matter relating to the alleged utterances which appear to have been made by Black Leopards FC Chairman, Mr David Thidiela,” the league’s statement read.

“The BoG referred the matter to the League’s Prosecutor, Mr Nande Becker, for urgent attention.

“In the interim the BoG resolved to place Mr Thidiela on precautionary suspension from the PSL Executive Committee until the matter is resolved.”

An audio clip of Thidiela’s rant has done the rounds on social media.