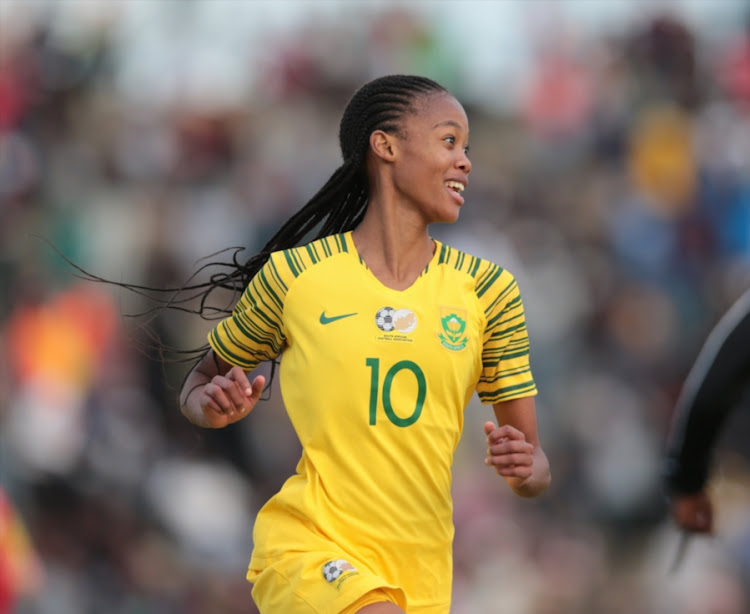 Linda Motlhalo of South Africa celebrates after scoring a goal during the Cosafa Women's Championship match between Banyana Banyana and Malawi at Wolfson Stadium on September 17, 2018 in Port Elizabeth.
Image: Richard Huggard/Gallo Images

Linda Motlhalo’s three goals for Banyana Banyana against Malawi on Monday thrust her into the national spotlight‚ but she has been a star on the rise for some time and has been tipped to become a global icon for women’s football.

Motlhalo bagged her first Banyana hat-trick as South Africa romped into the semifinals of the 2018 Cosafa Women’s Championships with a 6-0 rout of Malawi and they will face Uganda on Thursday.

Two of her goals were set up by her unselfish Houston Dash teammate Thembi Kgatlana as Motlhalo capped an excellent individual performance in which she showed her range of passing and intelligence on the ball.

Former Banyana Banyana coach Vera Pauw‚ who also led Motlhalo at Dash this season‚ has no doubt that the 20-year-old can be a genuine global star.

“Linda is very skillful player with a great awareness of the game and a great feeling for the moments [to go] forward.

"She showed that already at the Rio Olympics‚” Pauw told SowetanLIVE recently.

“She was already the attacking midfielder of Banyana Banyana then. She is very talented‚ and I have no doubt that she can grow into a top star in the world.”

It is a view echoed by stalwart Banyana defender Janine van Wyk‚ who was also with Motlhalo in Houston this year.

“Linda has an eye for always going forward and making the penetrative passes‚ and when she reaches her peak at 25 or 26 years old‚ she is probably going to be one of the best players in the world‚" Van Wyk said.

"If she carries on the way she is‚ if she continues to play in a professional set-up like this [Houston]‚ she has a really bright future."

Motlhalo will be back in action against Uganda on Thursday as Banyana look to win a place in the final of the regional Cosafa competition‚ where they would face one of Zambia or Central African guest nation Cameroon in Saturday’s decider.

Banyana Banyana’s emphatic 6-0 hammering of Malawi on Monday showed all their quality as an attacking threat‚ but a greater challenge awaits them in ...
Sport
3 years ago