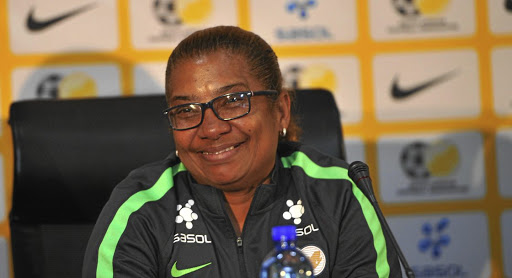 Banyana Banyana coach Desiree Ellis is so concerned about her charges' chronic goal-scoring woes that she's pondering following the route of Orlando Pirates and bring in a finishing specialist.

Banyana are currently in a training camp preparing for the Cosafa Women's Championships, which will be staged in Polokwane next month.

Pirates recently confirmed the arrival of Stephane Adam, a "specialist coach for finishing", as the Soweto giants aim to tackle the crisis of scoring goals.

Speaking at Banyana's media briefing at Soweto's Nike Centre yesterday, Ellis was anxious about how her troops have been failing to convert their chances. She implied they might, as well, be tempted to get a specialist coach for finishing.

"There have been a lot of developments behind the scenes [about possibly finding a specialist coach for finishing]. We want to utilise everyone to make sure we leave no stone unturned,'' Ellis said.

"When we work on our finishing, it is not only the strikers but everyone. That's one of the things we work on extensively in this camp. We believe that poor finishing has been the problem in the past tournaments.''

Banyana are the defending champions of the Cosafa Cup after clinching the last edition of this regional competition in Zimbabwe last year.

Ellis wants to utilise this tournament to ready the team for the Africa Women's Cup of Nations (AWC) to be hosted by Ghana later this year. The Banyana mentor may also use the upcoming Cosafa to assess new players.

"It will be an added pressure to play at home. Cosafa gives us an opportunity to look at other players as we prepare for AWC. In the last edition in Zimbabwe, we introduced 10 new players. That shows
the importance of such tournament,'' noted Ellis.