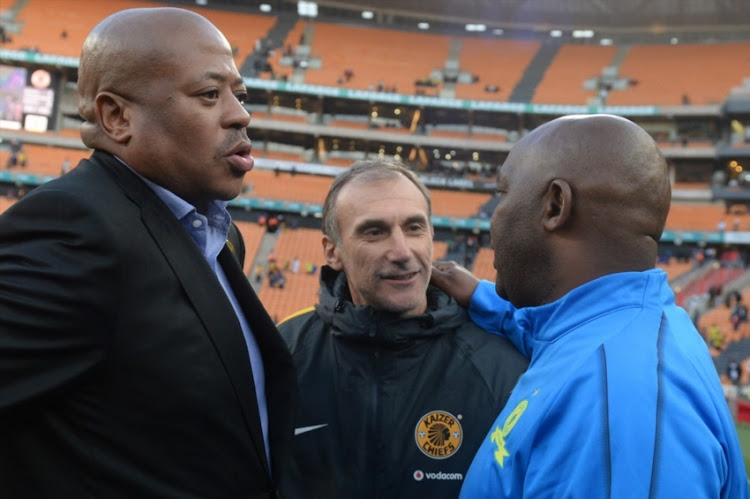 Kaizer Chiefs’ difficult start to the new Absa Premiership season continues on Tuesday when they host BidVest Wits at the FNB Stadium‚ looking to build on the point gained against champions Mamelodi Sundowns at the weekend.

It will be another tough early test for new coach Giovanni Solinas‚ who has already stated he will need time to get his side firing on all cylinders having only officially been in the job for a little over a week.

He will view the draw against Sundowns as a positive result‚ and the celebrations after the final whistle showed this‚ but a new-look Wits will provide another big test of his bid to revive the ailing Soweto giants.

Italian Solinas will know all too well that while the club management may be patient with him‚ success-starved fans will be less so‚ but he believes he is doing all he can at the present time.

“I know what’s expected of me. When you join a big club like Chiefs you know what you have to do and that is to win points‚” Solinas said.

“I am very happy with the professionalism of my team. The players are working hard at training and that’s exactly what we need to do if we want to challenge for honours this season.

“We have a limited period to recover before our next game against Bidvest Wits. It promises to be another tough encounter‚ but we will be ready come Tuesday night.”

The Chiefs of the weekend was much the same as that of last season – looking solid defensively but with little bite going forward.

With early-season legs likely to be heavy‚ Solinas could make a number of changes for the fixture‚ though he had little on the bench on Saturday to improve the team.

Colombian striker Leonardo Castro will be a doubt after he limped off late on‚ replaced by the Venezuelan Gustavo Paez‚ while Rama Mphahlele was also forced off after he had a fine game.

Evergreen winger Siphiwe Tshabalala looked the most potent attacking threat for the side‚ even if the Man of the Match went to debutant Khama Billiat.

Wits started their 3-0 demolition of Free State Stars on Saturday with five new signings‚ using seven in total in the match.

The 2016 champions looked slick and in control against a handy Stars side and what coach Gavin Hunt‚ forced to watch from the stands as he served a suspension carried over from last season‚ will be most pleased about is the effectiveness of the team in front of goal.

Namibian winger Deon Hotto was most impressive and the former Bloemfontein Celtic and Lamontville Golden Arrows player will be a major threat to Chiefs again.

Hunt may also be tempted to start with powerful Scottish striker Simon Murray after he made his debut late on off the bench.

Sundowns will also be back in action on Tuesday when they travel to Limpopo to meet bogey side Polokwane City at the Peter Mokaba Stadium.

City did the ‘Double’ over Sundowns last season and held The Brazilians to a 0-0 draw in their fixture before that‚ the points gained in the last campaign being instrumental in keeping the side in the top-flight.

City lost 1-0 ‘away’ at provincial rivals Black Leopards at the weekend‚ a game that was staged at their home ground with the Thohoyandou Stadium not yet up to Premier Soccer League requirements.

Former Sundowns striker Rodney Ramagalela will be the obvious dangerman again for Sundowns having netted three times against them last season.

Sundowns are likely to use coach Pitso Mosimane's 'player management' to shuffle their pack and could hand full debuts to Lebohang Maboe and Mosa Lebusa.

With the investment made in the team‚ the expectation at Sundowns now is that they will win every game and more dropped points here would be seen as a major disappointment.