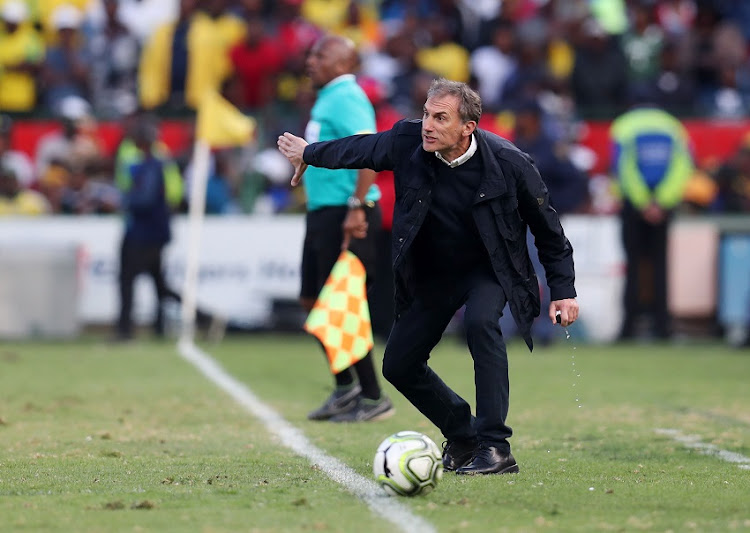 New Kaizer Chiefs coach Giovanni Solinas is pleading with the club's fans to give more time as he begins attempts to restore the once dominant side back to its former glory.

Solinas replaced Steve Komphela‚ who went three seasons without a trophy‚ to mixed reactions from the fans and the Italian said it was important to note that he is not a magician.

Chiefs managed a 1-1 draw against defending champions Mamelodi Sundowns in front of a packed Loftus on Saturday in Solinas' first game at the helm.

“I know that Chiefs is a big club with big expectations‚" he said.

"We have been through three seasons without a trophy and I know the fans (do not) want that.

"But I need time because I am working hard from the morning to the evening in planning sessions so that we make our fans happy.

“I need time and a lot of training sessions to fix the mistakes and the players to understand my philosophy.

"So far I am happy because the reaction from the boys to the training sessions has been very positive.

"To win trophies you need preparation‚ you can’t win a trophy because you have a magic wand.”

Pressed on a time frame‚ Solinas did not want to commit himself.

"Some players learn quickly‚ others want more time and at the moment I can’t say the exact time when we will be able to win a trophy.

"The quicker the players learn and understand my style of doing things the better.

"I know the fans want us to win the trophies and we are going to try to do that.

"Pitso is the best coach at the moment in South Africa but if I am not mistaken he did not win any trophy in his first season‚ so people must be patient‚” he said‚ adding that there will always be pressure at Chiefs.

“I am very comfortable‚ I like pressure because it is normal and you must accept and manage it with a positive mindset.

"Sometimes a club goes through a period of transition and doesn’t win the trophy in a while.

"I am Italian and in Italy‚ Juventus went about two seasons without winning a trophy.”

Solinas went on to say that he is happy with the composition of the squad.

“I am happy with the squad but I don’t want to talk about the transfer market.

"I am available to talk about players in the squad and if you want to know about Mzikayise Mashaba you must speak to Bobby (Motaung).

"I don’t want to talk about him (Mashaba) because he is not a Chiefs player.”