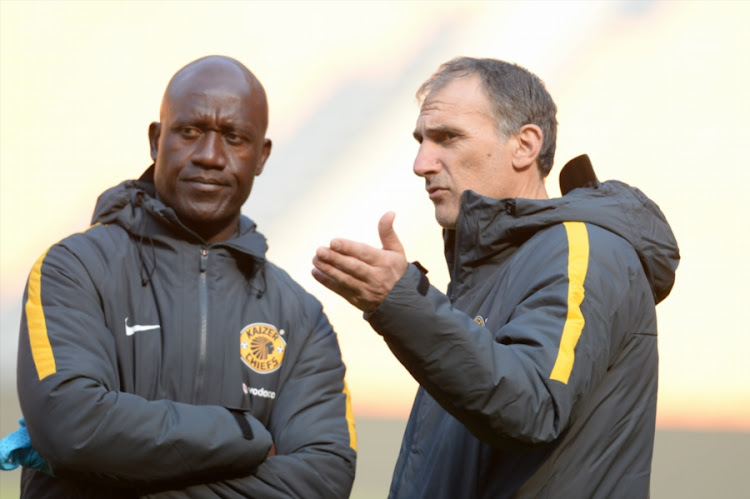 Giovanni Solinas has conceded that he would have preferred it if his first match in charge of Kaizer Chiefs was not against Absa Premiership champions Mamelodi Sundowns.

The 50-year-old Italian received his work permit on Monday‚ and has finally made his first public statements‚ published on Chiefs’ official website on Thursday morning.

Solinas admitted that a first task of taking on star-studded Sundowns in the PSL’s season-opening game at Loftus Versfeld on Saturday (kickoff: 3pm) was a big ask for any new Chiefs coach.

“Playing against the reigning champions is never easy‚” he said.

“Sundowns started their season early‚ because they had to play African Champions League games.

"They are the favourites for this season and they have a fantastic coach in Pitso Mosimane‚ who leads his team in special ways.

“I would have preferred to have played them next month‚ but this is how it is.

“I know the expectations are very high. It will be a tough game‚ but we are ready.”

He added a word of caution that: “In football you need time‚ because one can’t change too much overnight.

“To prepare a winning team takes time. That’s not an excuse‚ that’s the nature of football.

“I know that the supporters want to win trophies and that’s what we all want. That comes with pressure‚ but that’s no problem. I am used to pressure.

“We are working hard to fulfil the fans’ wish to get a trophy. We will fight for our jersey‚ our colours and our badge to defend our honour.”

Solinas arrives at an Amakhosi who went three seasons trophyless under his predecessor‚ Steve Komphela.

The Italian has only won one recognisable trophy‚ the 2010 North African Cup Winners Cup with Algerian club ES Setif.

And his job at Chiefs is made tougher by his late arrival at Naturena following a prolonged search for a head coach by Amakhosi.

Solinas has been working against the clock since his arrival on July 13‚ almost a month into Chiefs’ preseason‚ which had been overseen by assistant-coach Patrick Mabedi.

The former Free State Stars coach will have had just three weeks working with the team when Amakhosi meet Sundowns.

He said‚ given he is trying to instill an attacking brand of football‚ his task is made even harder.

“I am busy implementing my philosophy of football‚ which is attacking football. That takes time and that’s a reality‚” Solinas said.

“We have to be patient. But I am extremely happy with the attitude‚ the commitment and the focus of the players at training. We are working hard to improve the tactics‚ fitness and psychological approach.”

Solinas watched form the stands in Chiefs’ preseason friendlies in the Maize Cup in Orkney‚ 2-1 Shell Helix Cup defeat against Sundowns at FNB Stadium‚ and a 1-0 loss against Cape Town City in the Mpumalanga Cultural Experience Cup in Nelspruit.

Everyone is predicting a Mamelodi Sundowns massacre of Kaizer Chiefs in their Absa Premiership opening match of 2018-19 at Loftus Versfeld on ...
Sport
3 years ago