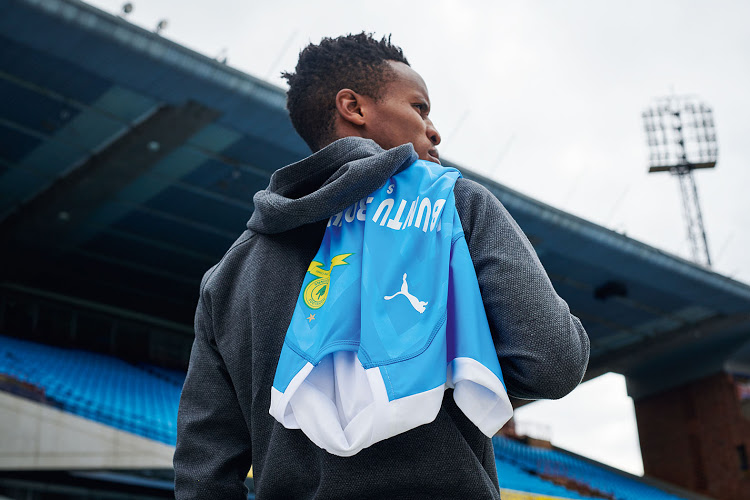 Mamelodi Sundowns playmaker Themba Zwane parades the club's new away kit which resembles the colours of their neighbours, the Vodacom Bulls, during a ceremony at Loftus Versfeld Stadium in Pretoria on Wednesday August 1 2018.
Image: Puma South Africa

Taking on bitter rivals Kaizer Chiefs in the opening weekend of the Absa Premiership at Loftus on Saturday does not bother Mamelodi Sundowns playmaker Themba Zwane.

Eyebrows were raised when the PSL confirmed that one of the biggest fixtures on the South African sporting calendar would be played on the opening day of the season but a nonchalant Zwane was unfazed by the prospect of facing high profile opponents like Chiefs so early in the new term.

“For me it does not matter as to when we play them‚” he said on Wednesday.

"I does not matter how soon we play them really. Actually I think it is better to play them now and get it over and done with in the first round.”

Sundowns went about their preparations in business-like fashion on Wednesday and they even paid homage to the Bulls by launching a Puma jersey that leaned on the colours of their Super Rugby neighbours.

Zwane said they have enjoyed their preparations ahead of the coming season‚ which were sandwiched between Caf Champions League matches against AS Togo Port‚ and they are ready to start the defence of their league title in style. “Pre-season has been good for us and we are ready because we are used to this schedule as a team‚" he said.

"Our technical team always give us programmes that help us to manage our workloads as players to avoid burnout.

"We are ready for Sundowns on Saturday.”

Sundowns beat Chiefs in the pre-season Shell Helix Cup a few days ago and the Bafana Bafana midfielder said they expect their visitors to arrive in the nation's capital highly motivated to avoid two defeats in a row to the same opposition so early in the season.

“We know that they have recruited some good players‚" he said.

"They have a new coach and they will come to us to avoid another defeat.

"Some of their players we know very well because they were here with us before moving to Chiefs.

"But we also have our good players and that is what is going to make it a good game.

“In these types of games‚ as a player you want to make sure that you are on top of your game to help the team because it is not only about three points but bragging rights.”

The Premier Soccer League will not be taking their lead from a number of European nations and closing the transfer window early‚ allowing clubs to ...
Sport
4 years ago
Next Article