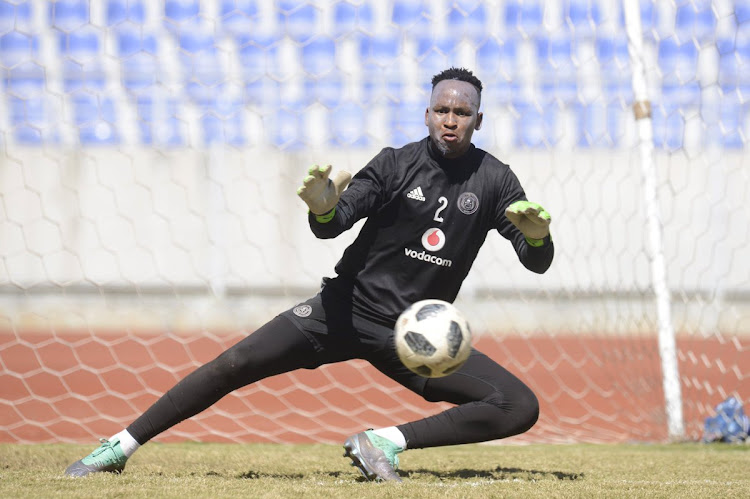 Orlando Pirates' goalkeeper Brilliant Khuzwayo, pictured during a training session at Rand Stadium south of Johannesburg, has been ruled out of action for up to three to four weeks, the club confirmed on Wednesday August 1 2018.
Image: Orlando Pirates FC/Twitter

Orlando Pirates newly signed goalkeeper Brilliant Khuzwayo has been ruled out for “three to four weeks”‚ meaning he will not be available for this weekend’s Absa Premiership home match against Highlands Park.

The Buccaneers confirmed the bad news on Wednesday and revealed that although the former Kaizer Chiefs keeper’s injury is not serious‚ his treatment is more of a corrective measure to allow the player to endure a pain-free season with the team.

“Khuzwayo will miss the start of the league as he is set to be out of action for between 3-4 weeks‚” the club said.

The club added that Khuzwayo will see an orthorpaedic surgeon this week to remove screws in his ankle and to have a scope performed.

Pirates open their season account with a home game against top flight returnees Highlands Park at Orlando Stadium on Saturday. Kickoff is at 8.15pm.

Khuzwayo’s injury means the keeper‚ who was eagerly awaiting the start of the new season in which he hopes to be the preferred keeper after years of playing second fiddle to Itumeleng Khune at Chiefs‚ will likely miss a trip Nelson Mandela Bay Stadium for Pirates’ second league match against Chippa United on Wednesday August 8.

Attacking midfielders Thabo Qalinge and Thembinkosi Lorch will also miss a couple of the opening matches of the season due to injuries.

'Orlando Pirates are favourites to win the league title'

Augustine Mulenga has never been one to mince his words and the striker says Orlando Pirates are favourites to win the 2018-19 Absa Premiership.
Sport
4 years ago

Happy Jele says it took a support structure around him and inner strength to turn around a nine-year Orlando Pirates career that last season at one ...
Sport
4 years ago

Thabiso Kutumela made his long-awaited return to full training‚ as he joined his Orlando Pirates team-mates at practice‚ the club confirmed on ...
Sport
4 years ago
Next Article