Billiat not a silver bullet for Amakhosi - Mphahlele 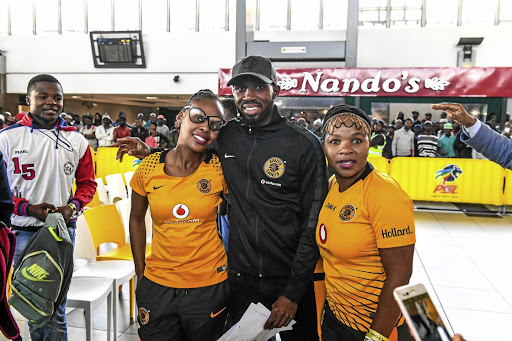 Kaizer Chiefs defender Ramahlwe Mphahlele has warned that the arrival of Zimbabwean star Khama Billiat must not be seen as a silver bullet to solve all the club's problems.

Billiat joined Amakhosi last month after having spent some five seasons with Mamelodi Sundowns. His shock move to Chiefs comes at a time when the club are thirsty for silverware following a three-year drought.

Mphahlele - or Rama to his peers - feels it would be unfair to expect Billiat to single-handedly work miracles at Naturena.

"By the way, Sundowns fans think I am the one who is fetching them from Chloorkop, but, no, it's football," said Mphahlele tongue-in-cheek during the launch of the MTN8 in Johannesburg yesterday.

"Players move when it's time to move but I am happy to have Khama. I hope the fans do not put pressure on him and think that because we have Khama now everything will be okay."

Billiat is the third player in as many seasons to cross the floor from Chloorkop to Naturena, with Leonardo Castro and Mphahlele himself having made the switch.

However, the players left Sundowns, who are perennial championship winners every season, for Chiefs who last tasted success in 2015.

Mphahlele admitted that the new season will be a bumpy ride as the team redefines its identity under new coach Giovanni Solinas. "It's going to be difficult but let's see if we can get one or two trophies. As players, it's time we show that we want to win.

"Change is not easy, especially at the beginning, but we are adapting. We are working very hard as we are trying to iron out little things and fix some things."

The former Downs skipper continued: "I know he [Solinas] came in late but the positive part is that most of the players were there last season."

Solinas is still waiting for his work permit before he can officially start his job with the team taking on Sundowns in the league opener at Loftus Stadium on Saturday (3pm).

Chiefs will then host Free State Stars in the MTN8 quartefinals a week later.