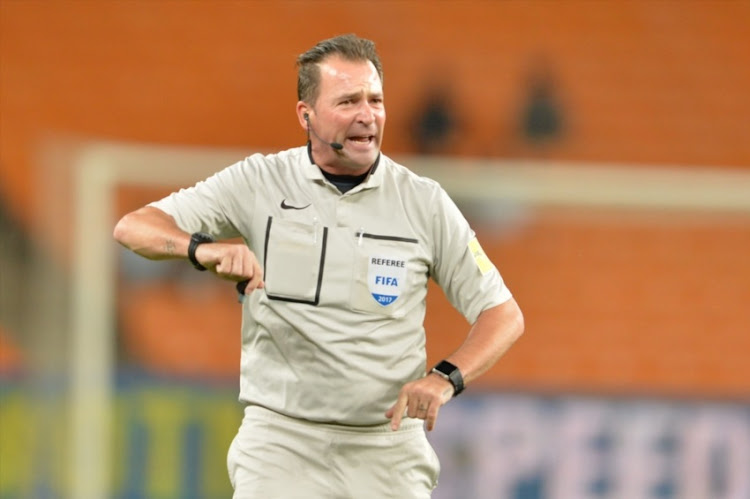 Daniel Bennett’s unofficial suspension from refereeing international matches could be at an end now that disgraced Ghana Football Association president Kwesi Nyantakyi has effectively been kicked out of the game.

It was the Ghana FA boss‚ who was also a Confederation of African Football vice president‚ who insisted Bennett no longer be allowed to handle any games on the continent after his controversial handling of Ghana’s key World Cup qualifier against Uganda last year.

The South African whistleman did have a stinker‚ disallowing a legitimate-looking last-gasp Ghanaian goal which would have kept alive slim hopes of toppling Egypt from first place in the group and going to the finals in Russia instead.

Instead‚ the game in Kampala ended goalless - and with it went the Black Stars’ last hope of a fourth successive World Cup finals appearance.

Ghana protested to FIFA about the incident and Nyantakyi make sure that Bennett was suspended from any other matches on the continent.

“Mr Bennett and [his] assistants denied Ghana a perfect goal in the 93rd minute with television replays showing that it was a perfect goal‚" the Ghana Football Association wrote it is protest to world football’s governing body.

He has not blown outside of South Africa’s borders since‚ having been pulled‚ just days later‚ from the African Champions League semifinal tie between Al Ahly and Etoile Sahel. Victor Gomes replaced him.

But with Nyantakyi caught in a video sting accepting bribes earlier this year and facing a lifetime ban‚ the way is now clear for Bennett to be re-appointed.

SAFA officials are said to be lobbying on his behalf to get him back on the CAF panel.

Nyantakyi‚ a member of FIFA's decision-making council‚ has been provisionally suspended for 90 days and resigned from all his posts in the game after being shown in a documentary taking kickbacks.

Nyantakyi‚ who had been GFA president since 2005 and was elected to the FIFA council in 2016‚ was filmed in a hotel room appearing to take a US$65‚000 bribe from a supposed businessman seeking to sponsor the Ghanaian football league.

The incident led to Ghana’s FA being dissolved. A new committee will be discussed by CAF president Ahmad and Ghana government officials at a meeting in Madagascar next week.