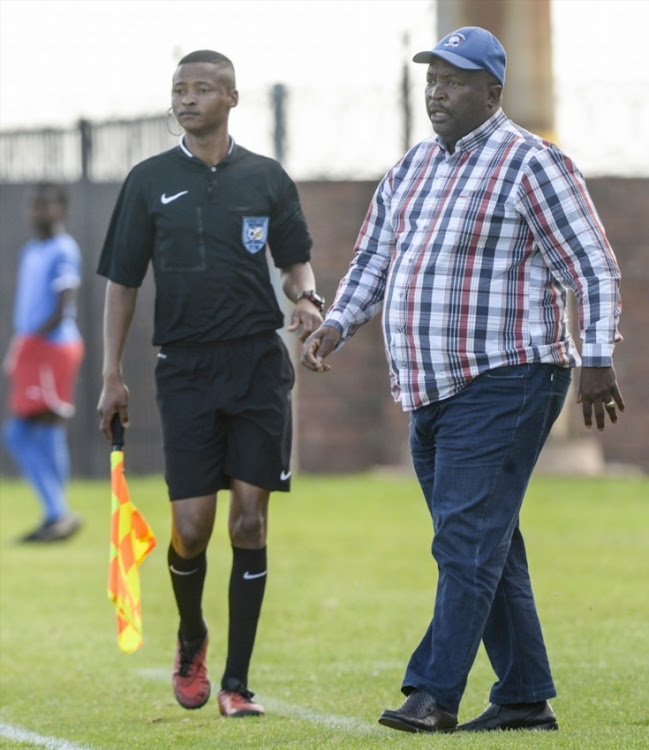 Jomo Cosmos will fight for second or third place in the National First Division and the promotion playoffs‚ because winning the title for automatic promotion is now out of the question‚ Ezenkosi coach Jomo Sono has said.

Sono said Cosmos were severely depleted taking a 4-0 hammering at the hands of leaders Highlands Park on Saturday at Vosloorus Stadium.

That result saw Highlands confirm themselves as commanding favourites for the NFD title and automatic promotion with a nine-point lead over second-placed Real Kings with nine games left to play.

Cosmos have slipped to 14 points behind the top team‚ but remain in fifth place.

“No‚ we had no answer today‚” Sono ruefully admitted afterwards.

“We had six top players out. We had no answer – you could even see. No shots at goal.

“In the second half we tried‚ but some of them were playing for the first time. I had to change the team around. It wasn’t easy.

“I only hoped we would draw‚ or at worst lose 2-0‚ but when we got a red card it became worse.”

Cosmos had Ivorian centreback Dahou Lebahi sent off in the 56th minute with the score at 2-0.

Sono said Cosmos (30 points)‚ who last campaigned in the Premier Soccer League in the 2015-16 season‚ will push to reel in their three-point gap from third-placed Tshakhuma Tsha Madzivhandila (33 points) and five from Kings (35)‚ to reach the playoffs.

“We’re still in fifth. So we’ll fight for second or third‚” Cosmos’s owner and coach said.

“Hopefully the players we were missing will all be back. The goalkeeper‚ central midfield‚ the two wings we have. It was not easy.”

Sono had predicted that his depleted Cosmos‚ who he described as a “sheep with broken legs”‚ would be “torn apart” by Highlands ahead of the weekend's fixture.

Cosmos host sixth-placed Stellenbosch FC next in Vosloorus on Sunday.