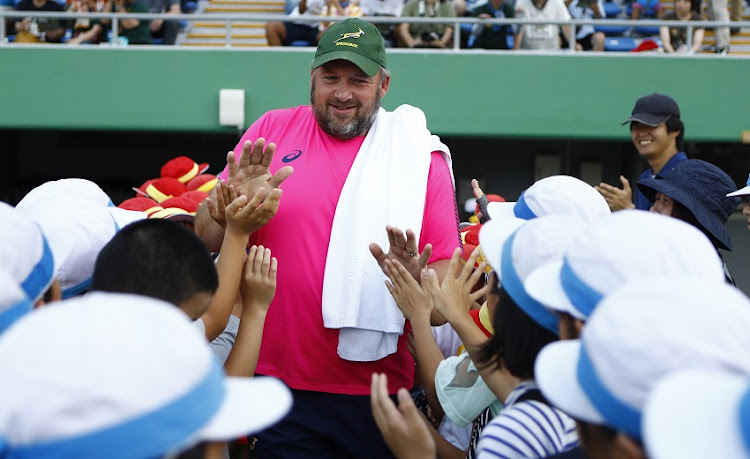 The Springboks may yet have a trick or two up their sleeve at this 2019 Rugby World Cup (RWC).

When Springbok assistant coach Matt Proudfoot was asked earlier this week if the All Blacks team they encountered in Yokohama are likely to undergo significant change deeper into the tournament‚ the forwards coach answered in the affirmative but was quick to add the Boks to that bracket.

Based on selection and playing style in the Yokohama game‚ the All Blacks look like they have room to manoeuvre at the business end of the tournament.

Given the way they were vanquished‚ the Springboks may also be ready for pruning for the knock-out stages.

Part of that process starts this Saturday where significant changes are likely for their match against Namibia in the City of Toyota Stadium.

At least one of the selections is likely to be left field.

Last week coach Rassie Erasmus intimated that he would consider deploying Schalk Brits at No8 and he looks set to do just that as he gives some‚ if not all‚ members of the backrow that toiled against the All Blacks a breather.

Captain Siya Kolisi was substituted after the 50-minute mark against the All Blacks on account of him not being fit enough to play the full 80.

Kolisi‚ who was injured for much of the build-up to the RWC‚ is still building his stamina and another hour or so against Namibia should take him significantly further down the road to restoring his match fitness.

Whether Erasmus would want to risk the captain against South Africa’s neighbours is moot.

Ordinarily there would be no point putting the captain potentially in harm’s way with more pressing engagements against Italy and a likely quarterfinal against Ireland looming on the horizon.

Erasmus will deploy his strongest available line-up for those matches.

Brits‚ who must feel like a bit of a third wheel behind Malcolm Marx and Bongi Mbonambi in the hooker pecking order‚ is also short of a gallop and last played against Argentina on August 17 at Loftus.

He may not have the height one would normally associate with a No 8 but he is a ball player gifted with dextrous hands‚ quick feet and sharp mind.

He will certainly tease the opposing defence with his trademark stepping but as much as he is likely to keep Namibia guessing‚ his backrow teammates will require some vision if they are going to operate on the same wavelength.

It is perhaps fitting that one of those players is likely to be the perpetually moving Kwagga Smith.