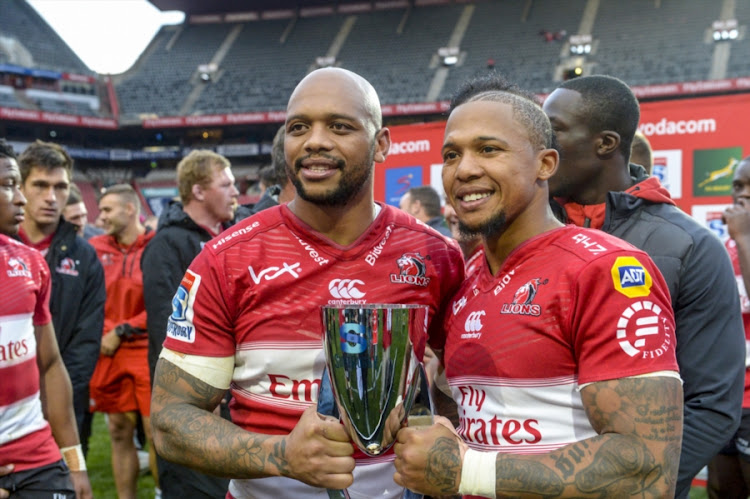 Lionel Mapoe (L) and Elton Jantjies of the Emirates Lions pose for a photograph after the Super Rugby match the Vodacom Bulls at Emirates Airline Park on July 14, 2018 in Johannesburg, South Africa.
Image: Sydney Seshibedi/Gallo Images

Elton Jantjies and Lionel Mapoe have finally opted to extend their stay in the Lions’ den.

Both concluded contract extensions with the union and will remain at Ellis Park until at least the end of next season.

Flyhalf Jantjies and centre Mapoe are both in the Springbok squad currently preparing to take on Argentina in Durban on Saturday. It is their selection for the Green and Gold that helped secure their immediate future with the Lions.

Due to their involvement with the Springboks their Super Rugby income will be augmented by SA Rugby.

Before the contracts were concluded Lions chief executive Rudolf Straeuli told SowetanLIVE the SA Rugby agreement was the only outstanding issue in the pair concluding new deals with the Super Rugby franchise.

Unlike previous seasons Jantjies (NTT Shining Arcs) and Mapoe (Kubota Spears) didn’t have contracts to play in Japan over the next few months.

Japan’s top clubs are increasingly reluctant to contract foreign players who may be called up for their national team.

By not travelling to Japan‚ however‚ the players increase the possibility of them earning selection for the Bok team to the World Cup next year.

Solid performances for the Boks now will hugely enhance their chances next year‚ but in both cases they have some ground to make up to be regarded first choice selections.

Both players have been central to the Lions’ march to the Super Rugby final over the last three years.

Since he made his Currie Cup debut in 2010 and his Super Rugby entry a year later‚ Jantjies has been the team’s playmaker.

Mapoe joined the Lions in 2011 after transferring from the Cheetahs.

After nine months on the sidelines‚ which included missing the entire 2018 Super Rugby campaign‚ lock Eben Etzebeth is set to be unleashed against ...
Sport
3 years ago

At the back end of his career‚ hooker Chiliboy Ralepelle will captain the Sharks in the 2018 Currie Cup‚ the union confirmed on Monday.
Sport
3 years ago
Next Article