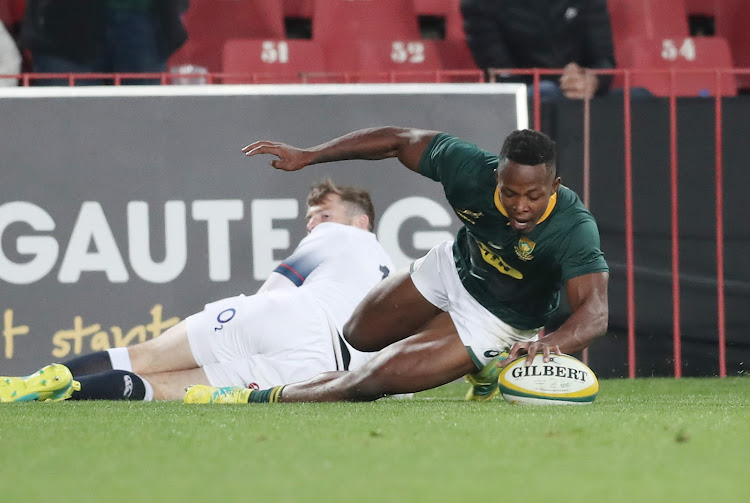 The Springboks and the Cell C Sharks winger S'busiso Nkosi scores a try during the international rugby match between SA and England at Ellis Park, Johannesburg on 09 June 9 2018.
Image: Gavin Barker/BackpagePix

Springboks and Sharks winger S'busiso Nkosi may be waylaid by injury but feels his provincial team have a massive Currie Cup score to settle.

The Sharks dominated last year's double-round competition but lost steam at a critical part of the tournament.

After they won 10 of their 12 league matches where they also won 10 games on the bounce‚ the Sharks slipped up against Western Province in their final round-robin game.

While they managed to get past the Bulls in the semi-finals‚ they showed big match jitters that came to bear in the final.

They lost the home final 33-21 to the same Western Province side that beat them in the league stage and what made the defeat galling was that the Sharks had a reasonable half-time lead (21-15).

“Losing the Currie Cup final counts as motivation and we've got a bigger point to prove now since we lost at home.

"We're going to try to get another home final and bring the cup home‚” Nkosi said.

“We had a great campaign last year and if we can take what we did last year and add a bit more big match temperament when it comes to the play-offs‚ we'll be good contenders to win the tournament.”

Nkosi‚ who said he is four to six weeks away from recovering from his ankle injury‚ also said Mahlatse “Chiliboy” Ralepelle is a good choice as captain for the Currie Cup campaign.

The Sharks have 10 players in the Springbok squad with hooker Akker van der Merwe making it ahead of Ralepelle.

In a tournament that is often seen as a developmental one behind Super Rugby‚ experienced players like Ralepelle aren't often around to lend a seasoned hand.

The Sharks start their Currie Cup against the Blue Bulls at home next week Saturday.

“Chiliboy is a very good guy to have as a captain and he's one of the hardest working guys in the team‚" he said.

"He leads by example and he doesn't have to say a word because the guys just respond to his energy and his aura.

"I'm very glad to have a captain like him.”

After nine months on the sidelines‚ which included missing the entire 2018 Super Rugby campaign‚ lock Eben Etzebeth is set to be unleashed against ...
Sport
3 years ago
Next Article