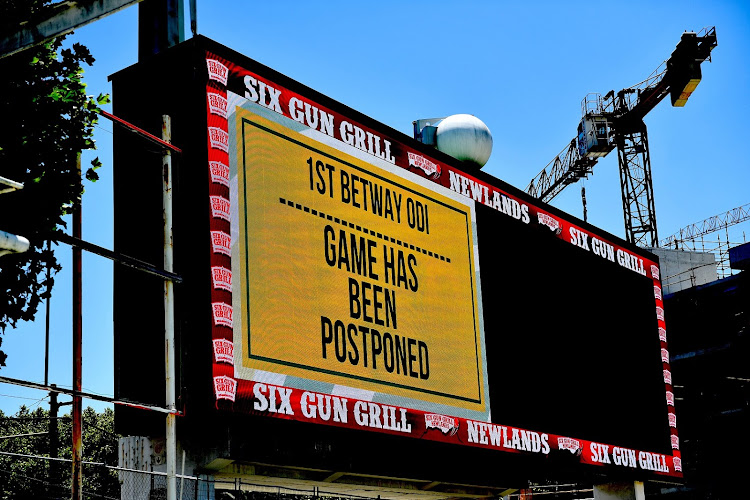 A view of the big screen before the 1st ODI match between SA and England at Newlands on December 4 2020.
Image: Ashley Vlotman/Gallo Images

The start of Sunday's One Day International between South Africa and England was delayed as players underwent a new round of testing after hotel workers in their bio-secure environment tested positive for the coronavirus.

"Cricket South Africa (CSA) and the England and Wales Cricket Board (ECB) have agreed to delay the start time for today's One-Day International match, which is due to take place in Paarl," said a statement on Sunday.

"The England players and management underwent an additional round of PCR tests on Saturday evening, after two members of the hotel staff testing positive for COVID-19.

"Whilst the ECB awaits ratification of those test results the decision has been taken to delay the start of today's ODI match," it added.

The match was due to get under way at 10:00 local time (0800 GMT), with no indication yet of when the first ball will be bowled if the new round of testing provides no positive cases.

It is another blow for the tour, which is providing much-needed revenue for embattled CSA, who have already had to cut short a money-spinning visit to India, and missed out on trips to Sri Lanka and the West Indies due to the coronavirus.

South Africa and England completed a three-match Twenty20 International series this week that was won 3-0 by the visitors, and are due to play three more ODIs, the last on Wednesday.

The first of those was due to start on Friday but was postponed after an unnamed South Africa player tested positive in the bio-secure environment.

That meant a fresh round of tests that were conducted on Friday night, with the South Africa team given a clean bill of health.

The home side also had two positive cases in the build-up to the six-match white-ball series. Those players were isolated and did not take part in the T20 matches.