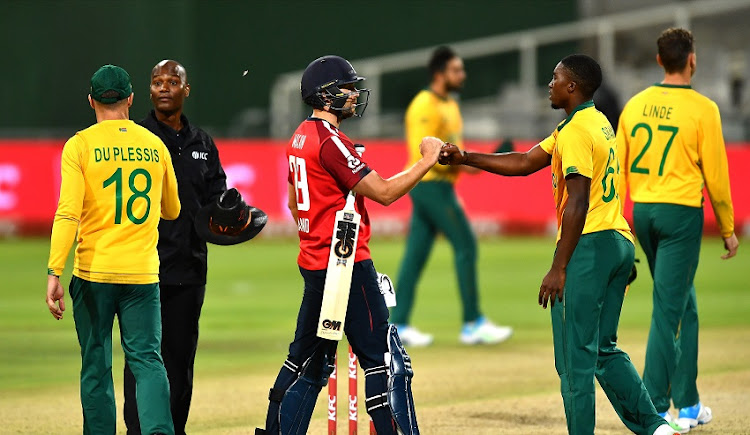 South Africa’s bowling came under intense scrutiny after England made light work of what should have been a steep chase in Tuesday’s third T20 at Newlands.

With Kagiso Rabada absent because of injury‚ more questions will be asked of SA’s bowling in the three-match ODI series that starts at Newlands on Friday.

England are clearly the best limited overs team in world cricket and while they’re still pursuing their rebuilding project‚ they’re still miles ahead of South Africa.

Jason Roy may be struggling for runs and fluency‚ but he’s always a knock away from form while Jonny Bairstow‚ Joe Root and Eoin Morgan will be champing at the bit to sink their teeth into SA’s bowling.

“KG’s massive. He always strikes with the new ball. We speak a lot about being able to take wickets in the first powerplay and shift the pressure to the batting team. In saying that‚ it’s another opportunity for a youngster to put up their hand‚” Langeveldt said.

A lot of debate also hinged around the need for the sixth bowler in the T20 series. With more overs‚ juggling resources properly becomes a priority‚ one of them being Andile Phehlukwayo.

The all-rounder missed the T20 series and his absence was keenly felt on the slower surfaces where his cutters and slower balls would have come in handy.

There’s also the batting depth that’s currently being provided by George Linde‚ but Langeveldt said Phehlukwayo is an important part of the South African bowling attack.

“When you’ve got six bowlers in your team‚ Andile is one of those options and he’s been great for us. When you look at his ODI record‚ it’s special and he does give us an option at the back end of the innings. If he is fit‚ we’ll look at that and make a judgement based on what we see‚” Langeveldt said.

The Proteas team will also be without Faf du Plessis‚ who has been rested for the 50-over engagement‚ while Pite van Biljon‚ Bjorn Fortuin and Reeza Hendricks have all returned to their franchises.

Young Lions fast bowler Lutho Sipamla‚ who was impressive in pre-Covid-19 engagements‚ has also been retained despite stinging public criticism of his showing on Tuesday. What seems to be forgotten in the vitriol is that the 22-year-old was playing in his first outing in any form of cricket since March.

“It’s been hard on Lutho. He hasn’t played in a while‚ so it’s been hard on him. With a top team like England‚ they were always going to target him. You need to speak to him‚ analyse his game and try calm him down‚” Langeveldt said.

“We tried to prepare him‚ but as you saw in the game‚ it’s hard when you’re put under pressure‚ especially against a top team like England.”