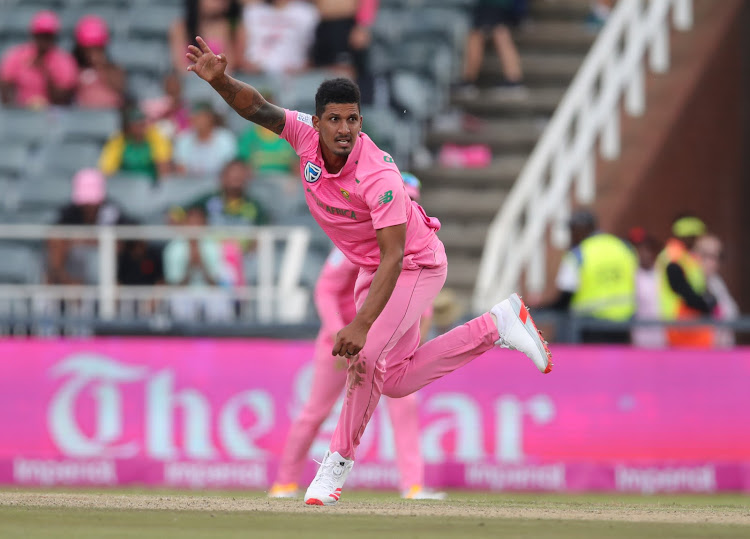 The 29-year-old Cape Town-born quick announced his arrival on the international stage with a maiden five-wicket haul in the second innings of the fourth and final Test against England at the Wanderers in Johannesburg.

Hendricks took his first Test wicket when he dismissed Dominic Sibley in the 36th over‚ albeit being a tad on the expensive side after conceding 111 runs in 23 overs.

But he followed that up by ripping through the England middle order in the second innings for his maiden five-for‚ conceding 64 runs in just 15.3 overs.

The new list of contracted players has four names that were not part of the contracted squad for the 2019/2020 season.

The writing was on the wall for De Bruyn after he was dropped for the start of the Proteas’ summer against England.

Faf du Plessis, who resigned as captain in all formats last month, also retained his national contract. Coach Mark Boucher and new skipper Quinton de Kock are on record as saying Du Plessis's experience and leadership skills are needed in the current team.

The list of 16 players is one short of the one announced for the past season.

“We have contracted 16 men’s players and 14 women’s players‚ which we feel is the appropriate number to maintain our national squads across the various formats‚” said Faul.

“This enables us to contract both our Test players as well as those who are limited overs specialists.”

Faul said players who will be selected to the Proteas during the 2020/21 season and who are not currently contracted can qualify for a national contract upgrade.

The Proteas' focus for the next 12 months will be the men’s Twenty20 World Cup in Australia in October as they bid to win a first major ICC trophy.

Other scheduled tours include the home series against Sri Lanka (Tests)‚ Australia (Tests only)‚ Pakistan (T20 only) and India (T20 only) including away tours to the West Indies and Sri Lanka.

World cricket and sport in general has been ravaged by the deadly coronavirus pandemic and South Africa was not sparred.

Schools closed and a travel ban was put in place as South Africa grappled to curb the spread of the killer Covid-19 disease.

Domestic cricket ground to a halt and went into lockdown earlier this month after President Cyril Ramaphosa announced a ban of gatherings of 100 or more people.

CSA also announced the women’s national list of contracted players with Nadine de Klerk and Sinalo Jafta earning upgrades during the course of the past season.

While the domestic season is in shutdown mode due to the coronavirus, player movement isn’t in abeyance as Thando Ntini will be shifting from the ...
Sport
2 years ago

Major sports events around the world that have been hit by the coronavirus pandemic:
Sport
2 years ago
Next Article