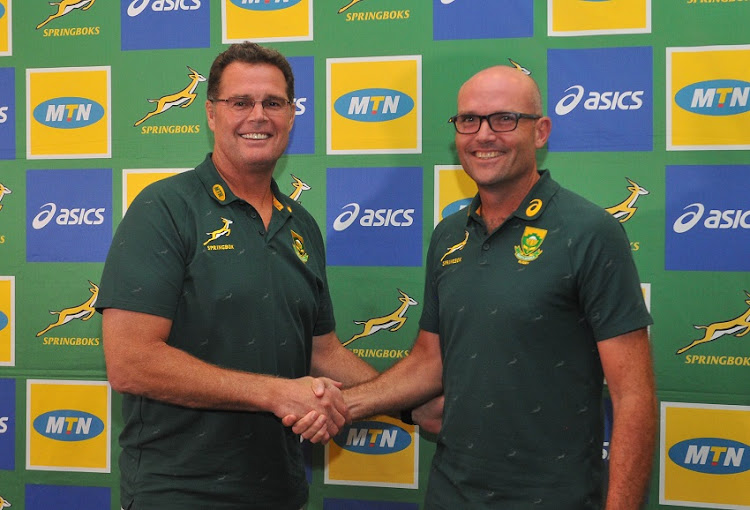 You’d expect as current Rugby World Cup holders and top ranked team in the world the Springboks would grimly hold on to what got them there during those heady months at the tail end of last year.

The ever restive SA Rugby director of rugby Rassie Erasmus and Springbok coach Jacques Nienaber believe further evolution is required if the Boks are going to meet all their objectives up to and including the next World Cup.

Clearly‚ this year they want to deliver performances that befit their status as the game’s top team‚ especially in the Rugby Championship where they are desperate to show New Zealand they can win that crown without the distractions that tend to surface in a World Cup year.

Next year they have the monumental challenge that Warren Gatland’s British and Irish Lions will present them on these shores‚ while the global event in France in 2023 is another calendar entry marked in red.

Nienaber has told this writer that the Boks this year will have to start a new phase of regeneration in their playing ranks.

He expects several experienced players to step back or fall away from Test rugby after next year’s engagement against the British and Irish Lions.

Already vacancies occur following Tendai Mtawarira‚ Francois Louw‚ Schalk Brits‚ as well Frans Steyn’s (although he has not officially said so) decision to call time on their Test careers‚ but the next World Cup may also be a bridge too far some incumbents on the cusp of or over the age of 30.

Duane Vermeulen‚ Elton Jantjies‚ Willie le Roux‚ Vincent Koch‚ Trevor Nyakane‚ Makazole Mapimpi and Cobus Reinach all fall into that category but some‚ depending on the positions in which they play‚ may yet display longevity.

To budget for that expected exits the Bok selectors may need to perform some tinkering this season‚ although not quite with the same alacrity with which Erasmus started his tenure in 2018.

Players in the Pro14 have been more closely observed this season.

Hooker Joseph Dweba would almost certainly blip on the selectors’ radar due to his destructive ball carrying‚ especially with Malcolm Marx playing in Japan and Bongi Mbonambi still out injured. In loose forward Junior Pokomela the selectors may have much to ponder over the next year or so.

Sharks No8 Sikhumbuzo Notshe has made a strong case to return to the Bok ranks and add to his six caps‚ while Sanele Nohamba is a scrumhalf that will be hard to ignore the closer we get to the next World Cup.

Another Shark‚ Aphelele Fassi has been in electrifying form and his elevation will more than likely happen this year.

Although Handre Pollard is the undisputed go-to flyhalf for the Boks‚ Nienaber will have to widen his options among the deputies.

Pollard‚ who now plays for Montpellier in France‚ is unlikely to be available for all the Tests this year.

He will certainly miss the Boks’ last Test of the year against Wales on 28 November‚ which falls outside the international window.

It is not that he will be short of options.

Curwin Bosch has played with greater maturity at flyhalf for the Sharks and he too has made a case for inclusion in a wider group. Elton Jantjies has blown hot and cold‚ while Damian Willemse hasn’t quite grasped the moment since his move from fullback to flyhalf at the Stormers.

The Boks selectors will be spoilt for choice‚ especially with assistant coach Felix Jones tasked with keeping tabs on around 18 players campaigning in the United Kingdom and Europe.

When others might has have opted for a period of consolidation‚ the Boks‚ almost refreshingly‚ are already in search of renewal.