Memorial for 'Hands of Stone' in Soweto 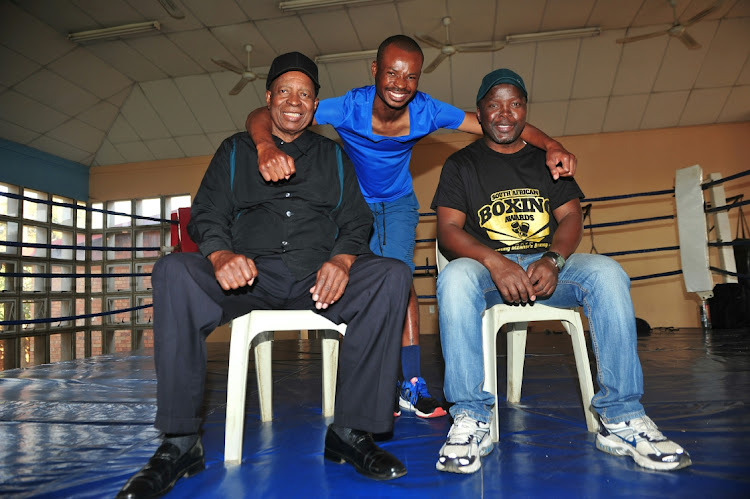 Respected boxing trainer Norman Hlabane has shared what he described as an unforgettable experience that he went through during the last days of Lehlohonolo “Hands of Stone” Ledwaba, who died last Friday.

Hlabane trained Ledwaba after the death of his trainer David Kgotsane until the soft-spoken fighter retired in 2006. Ledwaba then began honing the skills of other boxers and produced SA champions including IBF world champion Zolani Tete.

Hlabane himself went through a lot after losing his wife in 2011 and his son in 2012 and then quit boxing. Ledwaba persuaded him to come back and join him. They produced a Gauteng lightweight champ in Khaya Busakwe in 2019.

“All was well until he got sick,” said an emotional Hlabane of Ledwaba, who died of Covid-19 aged 49. “It was like flu but it got worse. We went through a lot that I am willing to share publicly. The message that he was gone cut through like a hot knife in butter.”

The 74-year-old veteran trainer, who was very emotional, said: “I was inside the house at that time. I got hot flushes, I went out of the house and started sweating. I felt like I was also having coronavirus. What I saw with Ledwaba during his last days is so painful. I have not left the house since. I am hurting.

“It is difficult for me to forget about the experience I saw when Ledwaba began getting sick.  I still see him crying to me even today as he did every day. Ledwaba saw me as a mother and father to him and after losing my only son I welcomed Ledwaba as my other son.”

South Gauteng High Court judge Boyce Mbha – a former member of the Gauteng Provincial Boxing Control Commission – said: "We've lost a real hero and a gentle giant who never allowed success to get into his head. If you did not know Lehlohonolo's achievements you would walk past him because he did not force recognition. He was so humble. My sincere condolences to his family.”

A memorial service for Ledwaba will take place at his CWJ Gym near the Morris Isaacson High School in Jabavu, Soweto, today at 1pm.

Joyce Kungwane, Tsholofelo Lejaka and Rodney Berman were all torn apart by the death on Friday of Lehlohonolo “Hands of Stone” Ledwaba, who succumbed ...
Sport
2 months ago

Covid-19 has claimed the precious life of SA’s old-time boxing great Lehlohonolo “Hands of Stone” Ledwaba who passed away on Friday night.
Sport
2 months ago
Next Article