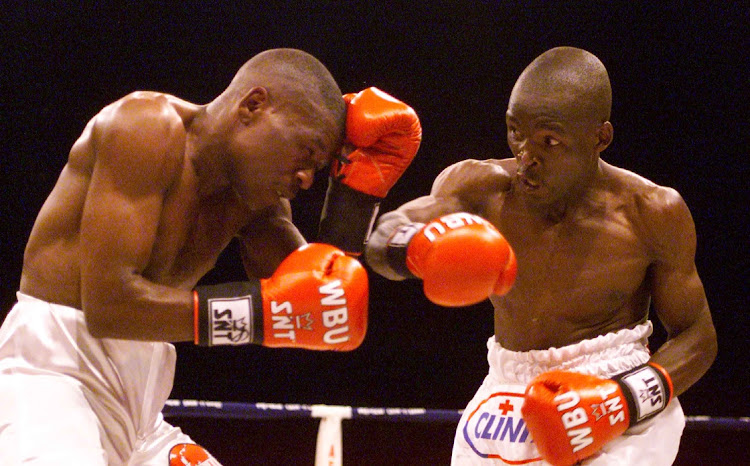 Joyce Kungwane, Tsholofelo Lejaka and Rodney Berman were all torn apart by the death on Friday of Lehlohonolo “Hands of Stone” Ledwaba, who succumbed to Covid-19 on his way to Lesedi Clinic in Diepkloof, Soweto.

Kungwane co-owned TLB Boxing Promotions with the departed hero. Ledwaba was in the forefront of the formation of the consortium involving former world boxing champions Dingaan Thobela and Jan Bergman – hence TLB, which are their initials.

Thobela and Bergman left, leaving Ledwaba and Kungwane, who have gone as far as to position their company as the second most active boxing promoter in the Gauteng province.

Golden Gloves promoter, Berman – who made it possible for Ledwaba  as boxer to win the IBF junior featherweight belt in 1999 –  also staged the WBU featherweight bout which Ledwaba won against Vuyani Bungu in 2002.

Said Kungwane: “I am devastated. I am numb. He is the reason why there is TLB and also why I am involved in boxing. But it is comforting for me that I was there even when Ledwaba had his last breath on Friday night when we were transporting him to Lesedi Clinic.

“The best way for me to honour him is to continue with the promotion of fights; I can only hope it will make his soul rest in peace to see TLB grow.”

Lejaka said when he arrived at BSA as the CEO Ledwaba welcomed him with open arms.

“He was the most supportive, constructive and humble legend I’ve ever known," Lejaka said. "He earned my admiration in my childhood as a champion, and continued to earn my respect in my administration days as a devoted and disciplined licensee, brother, friend and patriot.”

Said Berman: “Ledwaba was one of the finest fighters that came through our hands. He was on the verge of getting an HBO date. Regretably Ledwaba lost to Manny Pacquiao. I would put Ledwaba in the category of a young Dingaan Thobela. Such a sad loss.”

Dr Solly Selepe – the last person to attend to the fallen hero medically – said: “Ledwaba was brought here at Lister Clinic, Johannesburg, on Thursday for medical attention. I gave him the best medication and his condition  improved. The plan was to see him on Friday. Sadly that could not happen. We have lost a gentleman.”

Ledwaba, who fought his first pro fight in 1990, quit in 2006 due a detached retina. He started his career under Hezekiel Mtshali before teaming up with David Kgotsane who died two days before Ledwaba’s first defence of the IBF belt in 1999.

Mzimasi Mnguni helped Ledwaba  in one title defense before Ledwaba roped in Norman Hlabane as his full-time trainer until the end of his illustrious career. Ledwaba, who was to turn 50 on July 25, recorded 26 knockouts in 36 wins against six losses and a draw.

Covid-19 has claimed the precious life of SA’s old-time boxing great Lehlohonolo “Hands of Stone” Ledwaba who passed away on Friday night.
Sport
10 months ago