Former SA champ thrown a lifeline with bout against Ngebinyana 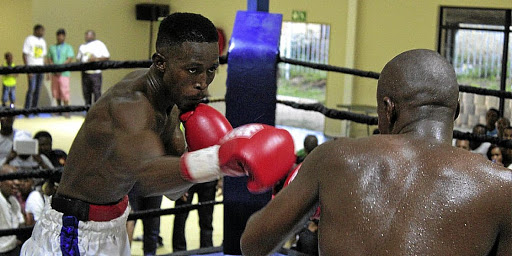 Innocent “Tycoon” Mantengu had to lose the SA junior-featherweight boxing title to learn that he is beatable.

He did not know that failure is inescapable and inevitable, no matter how good you are.

The former school teacher saw himself as  invincible until Ayabonga Sonjica dethroned him on September 29 last year.

Mantengu earned a good purse for that fight that was staged by Rumble Africa at Orient Theatre, and the 39-year-old polygamist who has three children had a good Christmas back home in Mtubatuba, KwaZulu-Natal.

But the agony of losing the title and the pain of defeat kept bugging him, he confessed yesterday. It hurt him deeply and left his ego bruised.

The former IBF Continental Africa champion says he has analysed and accepted what happened. “I have taken responsibility and I am now focusing on bettering myself,” he said.

Female boxing promoter Nokwanda Mbatha is a godsend to Mantengu. She has included him in her tournament that will take place at Olive Convention Centre in Durban on December 20.

Fuzile will make a comeback against the equally competent and dangerous Lunga Stemela at Orient Theatre on December 6. Fuzile last fought in September when he was knocked out in the ninth round by Russian Shavkadtzhon Rakhimov in the tournament where Mantengu lost to Sonjica.

Knapp will oppose Simon Dladla for the vacant IBO Youth junior-middleweight title on December 19 at Emperors Palace. Mhlongo will put his WBA Pan African middleweight belt on the line against former holder Walter Dlamini in Durban.

“I felt very happy to be offered this fight, and in such a big tournament,” said Mantengu.

The pain of seeing SAs accomplished boxer Vuyani “The Beast” Bungu being ignored for the induction to the International Boxing Hall of Fame in New ...
Sport
1 year ago
Next Article