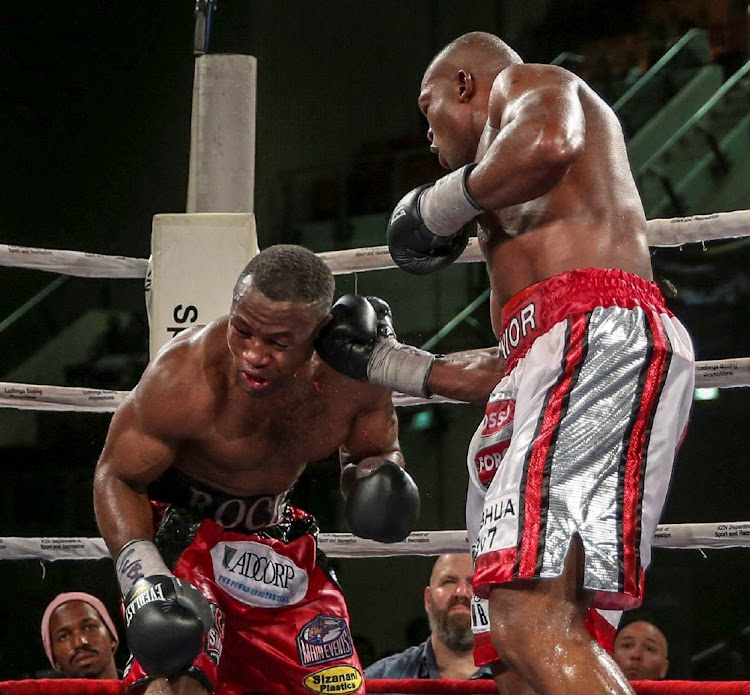 Ilunga “Junior” Makabu punishes Thabiso "The Rock" Mchunu en route to knocking him out in the 11th round of their WBC cruiserweight title eliminator.
Image: NICK LOURENS

The WBC cruiserweight championship fight has become an African affair, and this is history for African boxing regarding this most-sought-after belt.

The belt is held by Ilunga “Junior” Makabu, who hails from the DRC. Makabu will make his voluntary defence against Olanrewaju "God’s Power” Duradola – the US-based Nigerian.

The fight will take place on December 19 in the DRC where Makabu won the belt after defeating Michal Cieslak from Poland on points in January.

Duradola was supposed to meet WBC Silver titlist Thabiso "The Rock” Mchunu in a title elimination bout to earn the rights to challenge Makabu. The WBC issued a statement last month announcing that Mchunu, who is rated No 1, and the No 2 contender – who he beat in 2014 for the NABF title – will be appearing in a fight that will be staged by Lou di Bella. The New York-based promoter won the purse bid.

Speaking from their training camp in Germany, Damien Durandt said: “Makabu is excited to get back into the ring. I am also very happy with how our training is going and I am looking for a good performance from Makabu. Duradola is an experienced campaigner and has good power. I’m expecting him to bring to us a good fight.”

Duradola, 40, who won the ABU title in February, has 31 knockouts in 34 wins against seven losses. On the other hand, 33-year-old Makabu has recorded eight straight wins. Five were stoppages, and that includes him winning the WBC International, WBC Silver and the actual WBC belt which will be on the line on December 19. In total, the left-handed champion has stopped 24 of his 27 victims.

Durandt will land in SA on Saturday to be in the corner of his other charge – Jackson “M3” Chauke – who will defend his SA and WBC International flyweight titles against 22-year-old newcomer Luyanda “Pretty Boy” Ntwanambi at Orient Theatre on December 6. The fight will be staged by Rumble Africa Promotion.

The pain of seeing SAs accomplished boxer Vuyani “The Beast” Bungu being ignored for the induction to the International Boxing Hall of Fame in New ...
Sport
4 months ago

Boxing promoter Lebo Mahoko has urged authorities within Boxing SA to assist practitioners to reach for their dreams while regulating boxing to be ...
Sport
4 months ago
Next Article