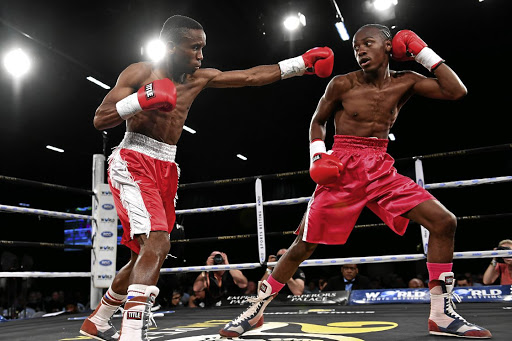 Tebogo Makwala in action with Ricardo Malajika. Malajika was hurt in a car accident and will be out of boxing for two months. /gallo images/ Johan Rynners

An injury after a car accident has ruined the eagerly awaited boxing match between undefeated prospects Ricardo Malajika and Arnel Lubisi, which was to take place at Emperors Palace on Friday night.

The two youngsters, who were supposed to have faced each other in the amateur ranks, were again set to exchange blows in Golden Gloves' "Power at the Palace" development tournament.

"A back tyre blew out in Ventersdorp and he damaged his hand and foot. He spent only a night in hospital, but he will be out of boxing for two months," said Gilmore.

"It is bad for him because boxing is how he makes his living. That is what I am worried about; the loss of income. Thank God his hand was not broken. My other boxer who is in the SA amateur team [Reggie Magashoa] was with him, and he too will be out of action for some time."

Stardom is calling for Ricardo Malajika

But the show goes on as scheduled with Roarke Knapp, Boyd Allen and Rowan Campbell looking to extend their winning streaks. Knapp and Allen are trained by Vusi Mtolo while Campbell is under the tutelage of Peter Smith.

Knapp, who has six knockouts in 10 wins, will take on Wynand Mulder in the junior-middleweight division over six rounds.

Mulder has been around with no success and has lost seven of his 12 fights. He was recently stopped within the distance by Allen at the same imposing casino in Kempton Park.

Allen will put his WBA Pan African middleweight belt up for grabs against Brandon Thysse. Allen has three wins while Thysse, who is trained by Damien Durandt, has a single loss in 12 fights.

Campbell will bid for the first defence of his IBO All-Africa super-
middleweight belt against Yanga Pethani. Campbell has nine wins while Phethani, from the Eastern Cape, has lost two of his 15 matches.

Etienne van Niekerk will fight Tristan Truter while Thulani Mdluli and Aidan Quin will meet in two junior-middleweight fights over four rounds, on the undercard.