Noni 'She Bee Stingin' Tenge gloves up for old foe 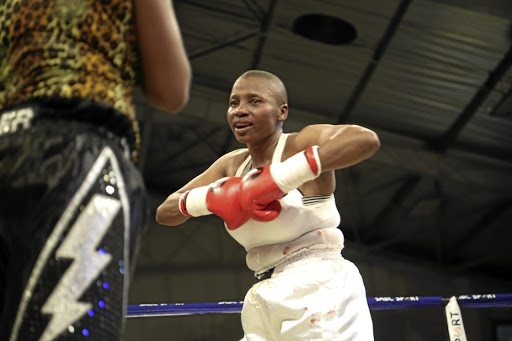 Noni Tenge will be in action for a non-title bout on Showtime Boxing Promotions bill tonight in Port Elizabeth. / Roderick Mulungana

If verbal barbs between Noni "She Bee Stingin" Tenge and Mapule "Thunder" Ngubane are to be believed, then their non-title fight in Showtime Boxing Promotions' bill at Nangoza Jebe Hall, New Brighton, tonight is not for the faint-hearted.

This is according to the promoter Mbali "Don Queen" Zantsi who has matched the two ladies in a grudge fight that will form part of her maiden tournament at home in Port Elizabeth.

Zantsi has been based in Johannesburg for 20 years. She is known for her unshakable attitude towards celebrating the women's month in August with her famous Women Only shows. Even tonight's tournament is part of the international women's month celebrations.

It was Zantsi who matched Tenge and Mapule in 2017 Kagiso where Tenge retained her WBF junior middleweight belt on points.

She said Ngubane - who is trained by Samson Ndlovu - wants to settle the score with Tenge.

Women's boxing in South Africa is nothing but an illusion.
Sport
3 years ago

"She feels something did not go right in their first fight and she wants to make sure that she beats up Noni this time," said Zantsi who added that: "on the other hand, Noni says she is more matured now at 37 and she is at the stage where the likes of Jacob Matlala and Mzonke Funeka beat youngsters through experience."

Melissa "Honey Bee" Miller - the pride of Eldorado Park in Johannesburg - will put her SA bantamweight belt on line against Thema Zuma from KwaZulu-Natal. Miller won that title after defeating Zuma last year.

Tenge to display her dexterity at Palace of Dreams

"Officials in these bouts will be women," confirmed Zantsi whose tournament is bankrolled by the Nelson Mandela Bay municipality.

She paid tribute to Nelson Mandela Bay municipality for their involvement, sport minister Thokozile Xasa, the MEC for sport in the Eastern Cape Bulelwa Thunyiswa, Lehlo Mfana and Noxolo Nqwazi, both from Nelson Mandela Bay. First bout is expected at 7pm.

Tomorrow night Thato Bonokoane and Innocent Mantengu will oppose each other for the vacant SA junior featherweight title at Kagiso Memorial Centre.

Their 12 rounder will headline Team Dida Promotions bill. Action kicks off at 7pm.