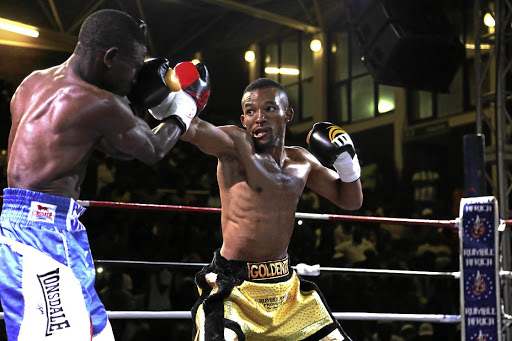 Reigning boxing trainer of the year Colin "Nomakanjani" Nathan says pressure going into a fight is what brings the best out of him.

Nathan has recently guided Hekkie Budler to victory for the WBA Super, IBF and the Ring Magazine titles in Japan and Moruti Mthalane, who won the IBF flyweight strap in Malaysia.

He was responding to the question regarding his assignment in Rumble Africa promotion in East London where his new charge Azinga "Golden Boy" Fuzile will take on vastly experienced former multiple-world champion Malcolm "The Stone" Klassen at Orient Theatre on Sunday.

Fuzile's IBF continental Africa belt and his No 12 rating by the IBF will be up for grabs.

The 22-year-old left-hander from Duncan Village, East London, will make his debut under Nathan, who is under enormous pressure to make sure that Fuzile retains his unblemished slate of 11 wins and to prove that he is also capable of taking a boxer, who had a good run with trainer Mzamo Njekanye, to another level.

"I perform at my best when under pressure," said Nathan yesterday.

"I am so excited - it is every trainer's dream to produce results. We are physically and emotionally ready. We've had good eight weeks together and the man has ticked all the boxes; the one remaining thing is a win."

His other boxer Lerato "Lights Out" Dlamini will face Haidari Mchanjo from Tanzania for the vacant IBF continental featherweight title, also in Rumble Africa tournament on Sunday.

"I had time to train my fighters individually, Azinga, Lerato and Boyd Allen (a former mixed martial arts champion who will make his boxing debut at Emperors Palace). All my guys will win, don't doubt me," said Nathan.