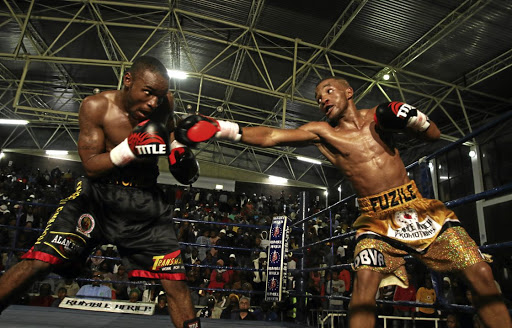 Rofhiwa Maemu has vowed not to lose against local foes again since his defeat to Azinga Fuzile, right, in their SA featherweight title bout last year. / MICHAEL PINYANA

Having made a vow "never" to lose against a South African opponent again after being defeated by Azinga "Golden Boy" Fuzile last year, Rofhiwa "War Child" Maemu, has reiterated that promise will not be broken any time soon.

He meets Tello "Razor" Dithebe at Meropa Casino in Polokwane on September 21.

True to his words, Maemu went on to chalk five consecutive wins, including the seventh-round demolition of supremely talented Tshifhiwa "Atomic Spider" Munyai in December.

He will bid for the third defence of his WBA Pan African featherweight belt against Dithebe in the main bout of Fox Sports Africa tournament.

Now based in Pimvile, Soweto, the boxer from Tshipako in Venda and trained in Johannesburg by Alan Toweel Junior, said: "The title defence is secondary.

"This guy is going down. I don't have time to box because I am not a boxer. I am a fighter. I said it after losing to Azinga that no local boxer will beat me and I will prove it."

The SA-based Congolese will put his title on the line against Emmanuel Anim of Ghana.

Mukala, who is trained in Randburg by Ashley Fourie, will be bidding for the third defence of his title.

Mukala has conceded only one loss to date, to Ryno "Lion" Liebenberg in October last year. He is coming into the Anim fight fresh from brutal rounds with Ibrahim Maokola of Tanzania.

Mukala boasts 10 KOs in 11 wins against a loss while 32-year-old Anim from Accra is undefeated in 13 fights.

The tournament features two Bagwasi brothers - Steven and Kagiso - from Botswana. Steven will take on Raymond Kupula from DR Congo whose career is guided here by Manny Fernandes.

Kagiso, who has a single win from as many fights, will be up against Tankiso Qelo over four rounds in the welterwieght.

Qelo will actually be making his professional debut. Paul Mangxilana from the Hunters Stable of trainer Lionel Hunter will welcome Kutlwoano Ogaketsi from Botswana while Rirothe Randima from Limpopo and Tshepang Babui from Botswana complete the bill with a featherweight four-rounder.