Bout shines the spotlight on Mvula 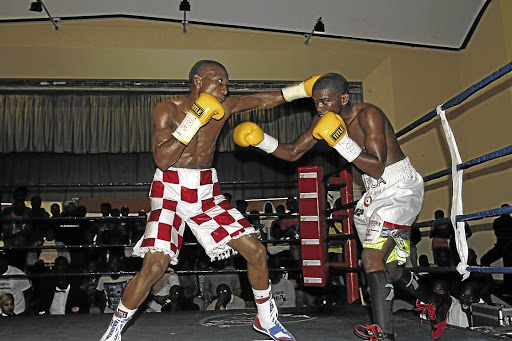 Lwandile Sityatha, left, and Siphosethu Mvula exchange the leather. Mvula has since rejoined his previous trainer after realising that his boxing career was headed for the scrapheap.
Image: SINO MAJANGAZA

While most eyes will be fixed firmly on the IBF Continental Africa junior lightweight title fight between holder Azinga Fuzile and former multiple world boxing champion Malcolm Klassen at Orient Theatre on October 21, the spotlight will also shine on rising star Siphosethu Mvula.

Fuzile, 22, will also be defending his No12 spot in the IBF against the 37-year-old man who will be out to guard against his legacy and dignity.

Their 12-rounder will headline the bill organised by Rumble Africa Promotion of Thembalethu Ntuthu.

Mvula is from the Duncan Village Boxing Club which was home to Fuzile until the latter bolted last month and joined HotBox Gym of trainer Colin Nathan in Johannesburg.

Mvula will oppose Prince Dlomo from Soweto for the vacant ABU lightweight title in the main supporting bout.

Lara back in SA for unfinished business

Trainer Mzamo Njekanye now looks at Mvula as the next shining light at his gym.

"Mvula wants to be the next star and we are giving him all the necessary support," said Njekanye, who also lost Xolisani Ndongeni to Nathan in 2015.

"I can simply say Mvula is now the torch bearer. I hope that guy [Dlomo] comes fully prepared for war because our gym produces warriors."

Mvula began his career with Njekanye before leaving him for other trainers.

Realising that his career was heading for the scrapheap, the boxer rejoined Njekanye who has now guided him to four consecutive wins. He has a total of 13 wins in 16 fights.

Phila Mpontshana will put his SA junior lightweight belt on the line for the third time against No4 contender Anthony Moloisane in another title fight.