Tributes pour in for Zulu 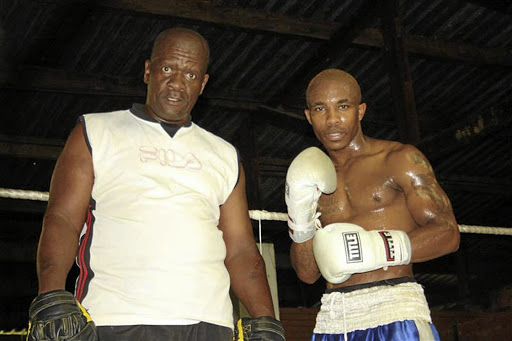 Themba Zulu with one of his boxing charges, Mxolisi Nombewu. Zulu died on Thursday/ SUPPLIED

Condolences are coming in thick and fast following the death of humble boxing trainer Themba Zulu, who died on Thursday morning after a long illness.

"Mageba", from KwaThema, Springs in the East Rand, was in charge of the Geo Maroon Boxing Gym, whose founder member Gideon Tshabalala died two weeks ago.

Zulu will be remembered for proudly taking a leisurely walk into the ring when his charges were fighting.

Promoter Tshele Kometsi said: "I was really disturbed to hear about Zulu's passing. I enjoyed everything he did, his proud walk to the ring, singing and his mannerism. He loved what he was doing and he was such a respectful gentleman."

Trainer Bernie Pailman commented: "Zulu had no issues with nobody, and he would smile with anybody without pretence."

Mvubu said: "This is the man who brought me back to boxing when I had already quit. He restored my confidence and we did things together. He loved boxing and he was a very understanding man who treated his boxers equally no matter where you came from."

Hadebe won Boxing SA's Female Prospect of the Year award under Zulu in Port Elizabeth in January. "It is still hard to believe he is no more, yet I know for sure that he had been sick. He suffered but it's sad that he is gone. May his soul rest in peace," she added.