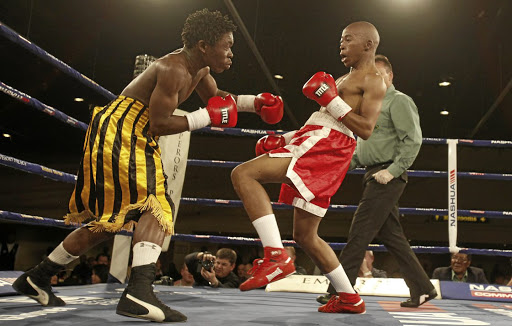 You cannot always trust boxing promotional posters. Often you have to take the claims they make with a pinch of salt.

But the advert on the TK Boxing Promotions bill for the tournament that took place at Rustenburg Civic Centre on Friday night turned out to be spot on.

Promoter Tshele Kometsi promised "the fireworks" and all fighters on the card did just that.

The event was to honour South African boxing legend, the late Norman "Pangaman" Sekgapane who died in April.

Promoters' association aims to clean up sport in Gauteng.
Sport
3 years ago

Ramagole from Orlando, Soweto, pulled a shocker - a second-round knockout that may put an end to Sihle Jelwane from Free State.

Ramagole seems to have regained his mojo as this victory was his eighth knockout in 12 wins against six losses and a draw, while Jelwane returns to the drawing board to ponder his future.

It was sweet revenge after Jelwane stopped Ramagole in the sixth round of their first clash in the Free State in July last year.

The SA boxing fraternity will show its appreciation for the love that the late Nelson Mandela a one-time aspirant amateur boxer had for the fistic ...
Sport
3 years ago

Jelwane earned himself another mandatory 90 days medical suspension after Friday night's knockout, having just made a comeback following a similar suspension due to his fourth-round stoppage loss to Jackson Chauke in March.

Leone to bring out best of Buthelezi

When an accomplished boxing trainer like Elias "Mr Fantastic" Tshabalala says his charge will take his opponent to the cleaners, a mere mortal should ...
Sport
3 years ago

In another bout, Uyanda Nogogo outpointed Aziz Uliza from Tanzania for the IBF Africa welterweight title, while Uliser Salvador Lara knocked out Ntlantla Ngamntwini in the third round to claim the vacant WBA Intercontinental junior bantamweight title. These fights were presented by Xaba Promotions and Events.