Komanisi steps up in class 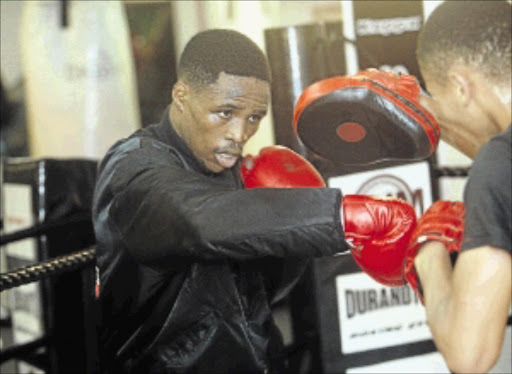 Possibility of super local showdown in the lightweight division has been further boosted by Lusanda Komanisi's announcement that he is also moving to that weight class.

His decision comes after Simpiwe Vetyeka introduced himself in that division with a victory for the WBO Africa title against Thompson Mokwana last month.

Azinga Fuzile has also moved up that weight class after failing to make the limit in his recent featherweight bout.

Komanisi said: "I'm in that weight division to fight anyone, especially champions.

"My goal is to be a world champion again."

Komanisi lost the IBO featherweight title in the boardroom because of inactivity.

"At 28, I am not getting any younger, so I decided to move up to the lightweight division."

"I am quite excited to have joined Golden Gloves. I know that I disappointed Rodney by pulling out of his Featherweight Super Four," said the boxer from Mdantsane.

Berman intends to feature Komanisi at Emperors Palace on September 1 - the same date and month he staged the first WBC title fight in Africa when Dingaan Thobela won the super middleweight title in Brakpan in 2000.

"Komanisi is an exciting fighter, a big puncher," said Berman. But he'll be strong at lightweight." Komanisi last fought in September when he was knocked in the second round by Filipino Jhack Tepora in the WBO Intercontinental title fight in East London.