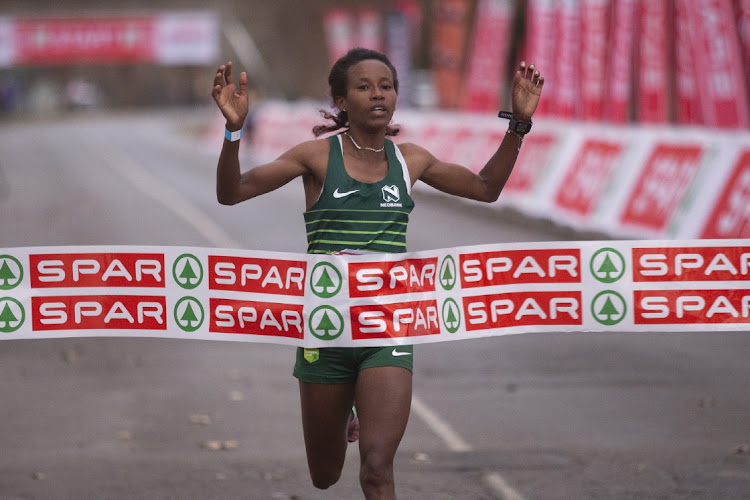 Ethiopian middle-distance runner Tadu Nare is closing in on her first Spar Grand Prix 10km title with two races remaining in the series.

Nare, 22, is at the top of the leaderboard with 100 points, followed by Fortune Chidzivo in second place with 84 points, while Kesa Molotsane is third on 83.

The next race takes place at Marks Park Sports Club in Emmarentia in Johannesburg on Sunday at 8am. The overall winner pockets a whopping prize money of R195,000, and the young Ethiopian has one hand on the cheque.

Glenrose Xaba of the Boxer Running Club is in fifth place with 72 points.

Nare must run and complete the remaining races in Johannesburg and Gqeberha to confirm her status as the champion.

Nare travels to her country after every race due to the strict Covid-19 restrictions, and she said she did not enjoy the Tshwane leg. However, she still bagged the vital win to stay top on the leaderboard and remains on track to win the big prize.

Her running club teammate Irvette van Zyl, who participated for the first time after recovering from a knee injury, secured fourth place in 34:51:5 seconds. Van Zyl said Nare would win the title and believes she would get better in the remaining races. “It’s been her and them. I do not see her losing the title,” added Van Zyl.

Molotsane of Murray & Roberts running club secured fifth place in the last race, clocking 35:12:6, and she refuses to throw in the towel. “It’s not over. Let’s see what will happen in the next race,” Molotsane told Sowetan.

With four races to go for the Spar Grand Prix women’s 10km series to conclude, SA runner Kesa Molotsane has ruled herself out from winning the ...
Sport
4 months ago

Ethiopian Tadu Nare of Nedbank is running away with the Spar women’s 10km Grand Prix.
Sport
4 months ago
Next Article