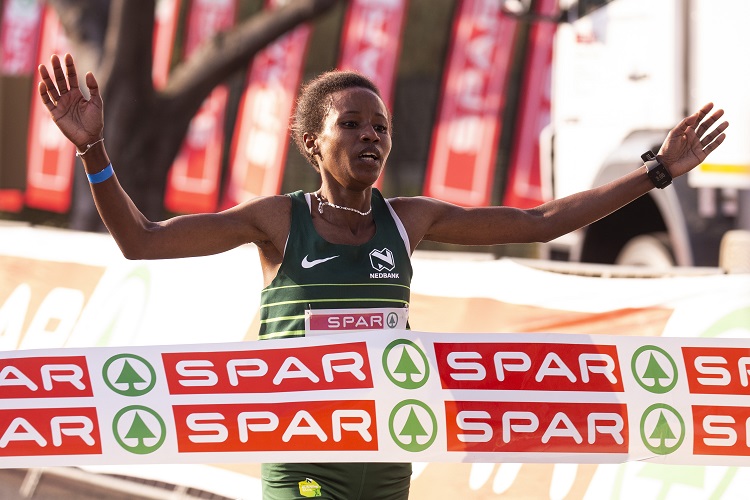 Tadu Nare is in the driving seat of the Spar women's race after winning the Durban leg on Saturday.

Nare of the Nedbank Running Club is now in pole position to clinch the Grand Prix, having also bagged victories in the two opening races of the Spar women's challenge in Pietermaritzburg and Cape Town before conquering in the Banana City on a windy Saturday morning.

"My goal is to run sub-31. I tried to do it in Cape Town but it was unsuccessful... today again, because of the wind I couldn't break 31. I'll try harder in Port Elizabeth (Gqeberha) to do it. With or without wind I'll go harder to run sub-31," Nare said through a translator post the race.

Meanwhile, the 31-year-old Steyn took time to share her experience of the recent Tokyo Olympics, where she claimed 15th spot, stopping clock at 2:32:10 – over six seconds shy of her SA record of 2:25:28 that she ran in Italy earlier this year.

"My Olympics experience was incredible. It was a very proud moment for me to represent South Africa. To wear that green and gold  is something amazing. I am hopeful to do the same in the Paris 2024," Steyn said.

The following leg of the Spar women's challenge is in Tshwane on Heritage Day (September 24), while Johannesburg will host the penultimate leg on October 3. The last series is billed for Qqeberha, six days after the one in the City of Gold.