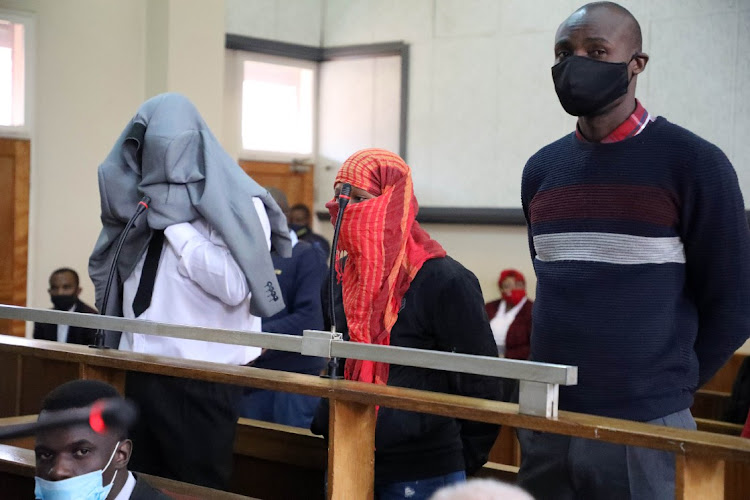 An explosive recording containing the voices of two police officers accused of murdering 16-year-old Nathaniel Julies has lifted the lid on how the officers allegedly conspired to cover up the killing.

The recording was extracted from state witness Const Mandla Dumisani Sithole’s phone,  which contains the voices of himself, Const Caylene Whiteboy, Sgt Scorpion Ndyalvane and two other officers following the murder of Julies in Eldorado Park, south of Johannesburg, on August 26 last year.

The recording was played on Wednesday in the high court sitting in the Palm Ridge magistrate’s court, where Whiteboy and Ndyalvane face a charge of murder.

Their co-accused, Sgt Forster Netshiongolo, faces a charge of accessory to murder after the fact.

In the audio, Whiteboy is heard saying: “... listen, we got information that there were two males standing at the container (truck) and they opened fire. The story is, we heard a gunshot when we got to the container. I got out last and when I shot that child (Julies) [he had] ran into the crossfire.”

Sithole further elaborated that Whiteboy was the only one who had addressed them about what to say.

A police officer who was present when Eldorado Park teenager Nathaniel Julies was fatally shot explained how a plan was concocted immediately after ...
News
7 months ago

Sithole told the court that he recorded the 20-minute clip on their way to Eldorado Park police station after they left Chris Hani Baragwanath Academic Hospital in Diepkloof, Soweto, where Julies was declared dead.

The state further played the recording in which Whiteboy is heardsaying, “...Scorpion prevented us from using the pistols and I came out with the shotgun and I did not know there was live rounds in the gun.”

In a later segment of the recording, Whiteboy is heard saying: “Guys, I’m going to be arrested, neh?”

Sithole and two other officers respond in unison: “No.”

She continued: “Why the hell did he (Ndyalvane) give us live rounds. He knows its dangerous.”

In a later segment, Ndyalvane is heard allegedly hatching a plan to tamper with the scene and give credence to their story.  “Forster is at the scene. He will plant two bullets at the scene by that container, like they were shooting at us.”

Ndyalvane further tells Sithole not to say anything to anyone.

Ndyalavane is also heard concocting to plant live rounds at the scene before they called the Independent Police Investigative Directorate to report the shooting.  “Even if you can put one there, that will be fine,” he is heard saying.

All the accused also face a count of defeating the ends of justice, while Netshiongolo is facing a count of perjury. They also pleaded not guilty to the charge.

She said her house is located opposite to where a broken down truck has been parked for years.
News
7 months ago

The three officers accused of murdering a 16-year-old teenager in August last year have all pleaded not guilty. Cst Caylen Whiteboy and Sgt ...
News
7 months ago

Cops implicated in death of Nateniël Julies had a 'hunger to kill', court hears

A police officer in the Nateniël Julies case “lied” and “misled” the court into believing he had one conviction when in fact he had three, the Protea ...
News
1 year ago
Next Article