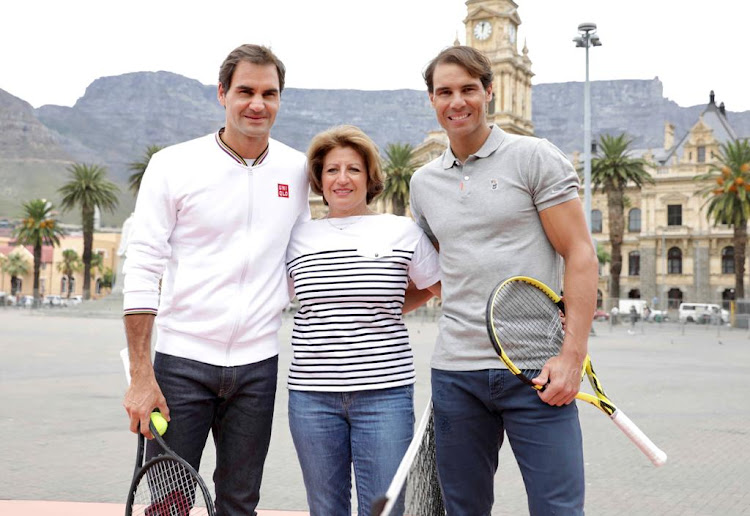 Lynette Federer, from Kempton Park, on the Grand Parade in Cape Town with her son Roger and Rafael Nadal on February 7 2020.
Image: Esa Alexander

Lynette, 67, was part of the small crowd on the Grand Parade, in Cape Town city centre, who watched the two tennis stars laughing as they exchanged trick shots and jokes. 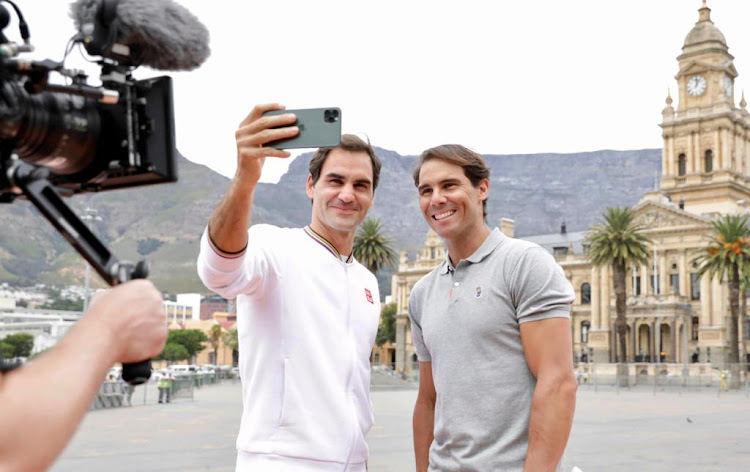 Even Roger Federer and Rafael Nadal couldn't resist the lure of a Table Mountain selfie when they visited the Grand Parade in Cape Town on February 7 2020.
Image: Esa Alexander 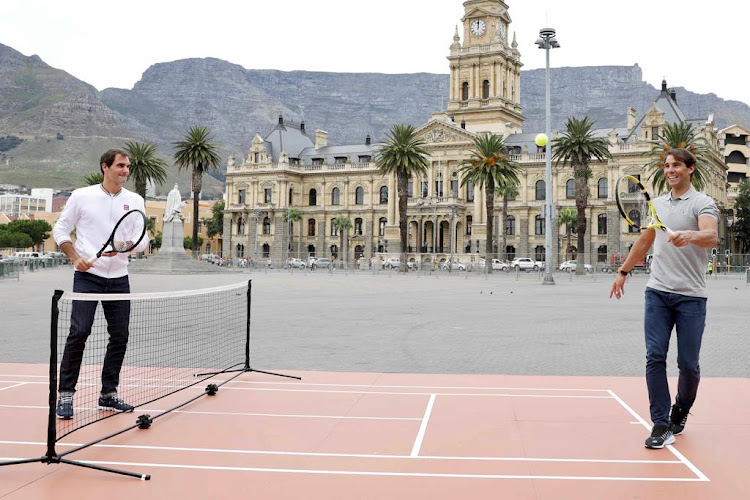 Roger Federer and Rafael Nadal in action on the Grand Parade in Cape Town on February 7 2020.
Image: Esa Alexander

The low-key appearance was part of the build-up to Friday night's Match in Africa at Cape Town Stadium, which will take place in front of a world-record crowd of 50,000 and a worldwide television audience.

After posing for family photographs with her son and his father, Robert, Lynette told TimesLIVE she was "very emotional" at the thought of finally watching Federer in action on her home soil. 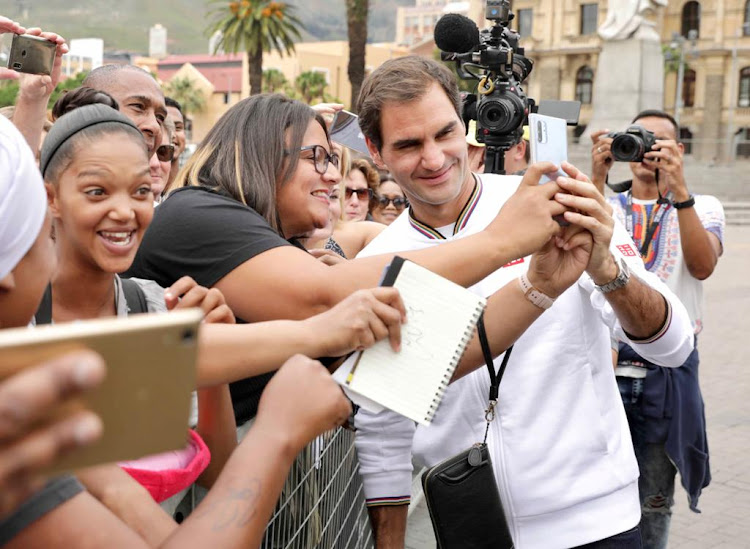 Selfie time for Roger Federer and one of his Cape Town fans on the Grand Parade on February 7 2020.
Image: Esa Alexander 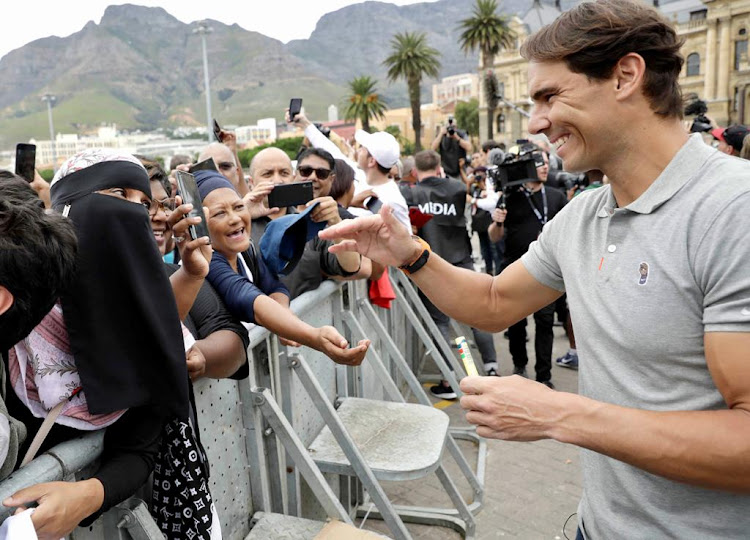 "I'm very happy that it's finally taking place," she said. "Having it in Cape Town is more than a dream come true."

Lynette said there would be a gathering of Federer's extended family in Cape Town on Saturday afternoon.

After the photo shoot, Federer and Nadal posed for selfies and signed autographs.

Earlier, Federer visited the Bo-Kaap, the so-called "Malay quarter" popular with Instagrammers for its colourful houses. 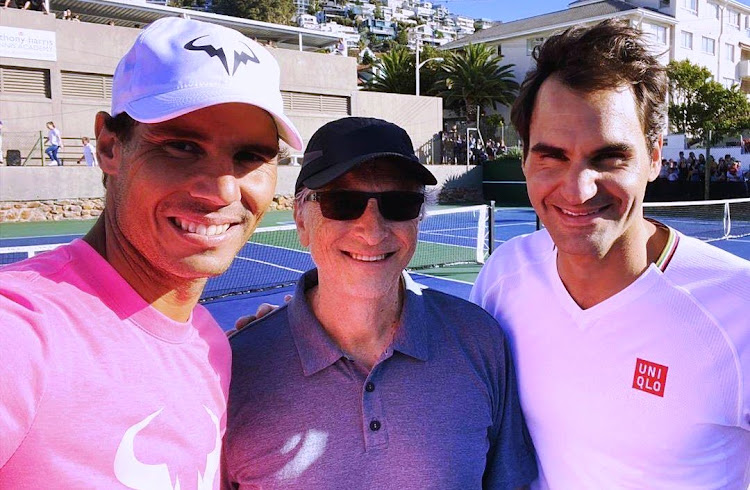 On Friday evening, Federer and Nadal will play a doubles match with Microsoft founder Bill Gates and comedian Trevor Noah before their singleas match.

Gates joined them for a practice session on Cape Town's Atlantic seaboard on Thursday.

It's. About. To... Go down! @rogerfederer @billgates @RafaelNadal #MatchInAfrica pic.twitter.com/sSFnBzLE1y

The main objective of the Match in Africa is to raise money for Federer's education foundation.

Children will also be the focus at a “learning through play” session at Cape Town Athletics Stadium on Friday afternoon.

This will be followed by an open practice session and a press conference on the court that has been built on the Cape Town Stadium pitch.

Only 3 days to go before we perform to the biggest crowd to watch a tennis match in the history of the sport. @rogerfederer @RafaelNadal @BillGates and @Trevornoah we got this. You go boys!!! ??? #matchinafrica pic.twitter.com/jzQo8IVtvZ

The evening crowd will be entertained by the Ndlovu Youth Choir, which won millions of fans across the world last year with its performances on America's Got Talent.

There will also be a performance by Cape Town's Zip Zap Circus.

A great tennis player in a blazer meets a fan. Well done Roger, I’ve been ignoring your DMs, didn’t realize you’re such cool guy otherwise I would have met you long ago. #moetmoment#MatchinAfrica pic.twitter.com/SnyyvmEEaL

On Thursday, Match in Africa sponsor Moët & Chandon hosted a brunch with Federer at the Belmond Mount Nelson hotel in Cape Town, where the star played tennis on a mini court with Springbok captain Siya Kolisi.

The Match in Africa: Four things to look forward to at the Roger vs Rafa tennis tournament

They're both used to being on top of the world, but Roger Federer and Siya Kolisi agreed to call it a draw when they met across a tennis net on ...
Sport
2 years ago

Cape Town was set for a day of superlatives on Friday thanks to a combination of sport, business and showbiz genius
Sport
2 years ago
Next Article