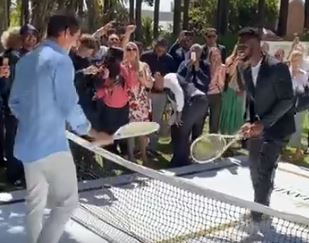 Roger Federer and Siya Kolisi meet across a net at the Belmond Mount Nelson Hotel in Cape Town on February 6 2020.
Image: Twitter/Siya Kolisi

They're both used to being on top of the world, but Roger Federer and Siya Kolisi agreed to call it a draw when they met across a tennis net on Thursday.

The tennis legend, who is in Cape Town for his Match in Africa with Rafael Nadal on Friday, met the captain of the Rugby World Cup-winning Springboks at the Belmond Mount Nelson Hotel.

Champagne company Moët & Chandon, one of the sponsors of Friday's event at Cape Town Stadium, hosted a brunch featuring Federer.

Sunday Times photographer Esa Alexander was there to shoot the pictures that will appear in Craig Jacobs' A-listers column in this weekend's Sunday Times.

Kolisi suffered a knee injury in the Stormers' 27-0 Super Rugby victory over the Hurricanes at Newlands on Saturday.

He will be out of rugby for 10-12 weeks, but the injury didn't stop him trying his luck against Federer.

After arriving in Cape Town on Wednesday, the 38-year-old tennis star — whose mother is South African — said he hoped to meet Kolisi, and his dream came true less than 24 hours later.

Federer pledged his support for the Springboks during their World Cup campaign in Japan last year. He sent a video message to Kolisi which was widely shared around the world.