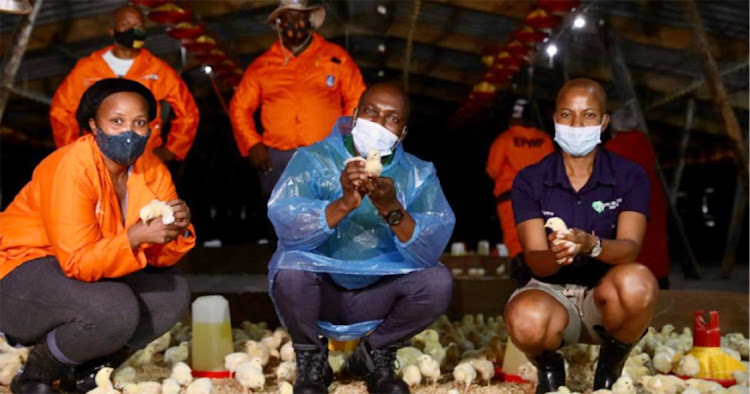 Retrenched poultry farm workers in KwaZulu-Natal have formed a poultry cooperative after finding themselves without any means to make a living following the closure of farms they worked on.

The Cato Ridge Chicken Farm in Hammarsdale has inspired many farmworkers to use the skills they learnt when they were employed to start their own business.

The workers were left jobless in 2017 when RCL Foods, which owns Rainbow Chickens, sold 15 of its 25 farms. This resulted in a loss of 1,350 jobs. Of these workers, 129 formed Isukile Agricultural Cooperative, which started operating in December 2020.

The cooperative has just sold its first batch of 7,500 chickens, and has enough space to expand to housing 34,000 chicks at a time, according to Isukile member Nonhle Mdunge.

“We supply our chickens to informal traders in our community and in Pietermaritzburg and surrounding communities. We want to expand as there are stores and restaurants that want big orders, but we can’t meet the demand,” she says.

“The municipality could not sit back and fold its arms while several families lost their livelihoods,” Kaunda said, explaining his municipality's involvement in Isikule venture.

The municipality plans to develop the farm into an agri-park incubator, which will create 103 jobs. It also wants to start a sheep-farming operation to create opportunities for about 48 small, medium and micro enterprises.

The sheep unit installation began this month and should be complete by July.

“In the first phase, four sheep units will operate, accommodating 1,000 sheep each. The first phase will create about 16 jobs,” says  Kaunda.

The municipality and the KZN department of economic development, tourism and environmental affairs have invested about R1m to assist the cooperative with facilities and tools, and R4m to buy a farm.

- This story first appeared in GCIS-Vukuzenzele

The Western Cape Honeybush Tea Cooperative is putting SA on the global map as a top tea producer.
SebenzaLIVE
1 year ago

Primrose Makgatho (43) of the AP Agricultural Cooperative in Bronkhorstspruit says farming is one of the most sustainable jobs in the world because ...
SebenzaLIVE
1 year ago

Five Tembisa women appreciate the opportunity they have to make money, thanks to government projects that have been sub-contracted to them for many ...
SebenzaLIVE
1 year ago
Next Article