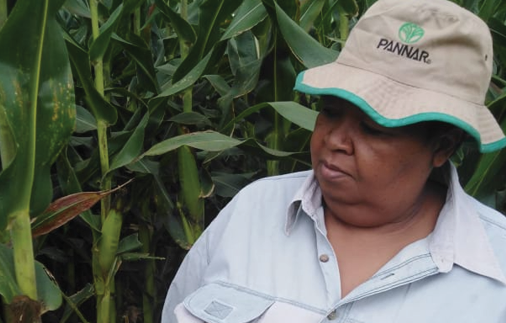 Primrose Makgatho (43) of the AP Agricultural Cooperative in Bronkhorstspruit says farming is one of the most sustainable jobs in the world because no day passes without people needing a meal.

“The growth of our country’s economy relies heavily on agriculture, and I would like to encourage women, youth and people living with disabilities to plough away to secure their future,” she says.

Makgatho discovered her passion for farming in 2010 when her husband asked her to join his farming business. She initially assisted with the bookkeeping, but later realised that the agriculture sector holds opportunities for women.

“In 2018, we successfully applied for land from the Gauteng Department of Agriculture and Rural Development to start our women-led cooperative.

“I grew up in the rural areas, so the love of agriculture was always hidden in me from an early age, although I took long to realise it because I spent most of my career running a construction company.”

Her business specialises in crop and animal farming and is benefitting from the department’s economic stimulus package.

“The department has assisted our farm by granting us the land on which we operate. It also purchased farming equipment and agricultural inputs worth R4 million for our farm, including tractors, planters, boom sprays, offset discs and bulk trailers,” she says.

“There is a huge opportunity for young female farmers. We have young people on our farm who we are mentoring, and government has opened doors for more young people to consider careers in farming, so that is encouraging. I would advise young women to be passionate and focused,” she says.

Makgatho is also the chairperson of Women in Agriculture and Rural Development in Gauteng.

To find out more about the stimulus package, contact the Department of Rural Development and Land Reform at 012 312 8911 or www.drdlr.gov.za.

How to spend money locally to grow the economy

Where you choose to buy goods or find services can impact not only your local economy, but the country’s financial wellbeing too.
SebenzaLIVE
3 weeks ago

Job loss a blessing in disguise for Thusini

When Nontando Thusini was left unemployed after the company she was working for relocated to Gauteng, she started planting vegetables in her backyard.
SebenzaLIVE
2 weeks ago
Next Article