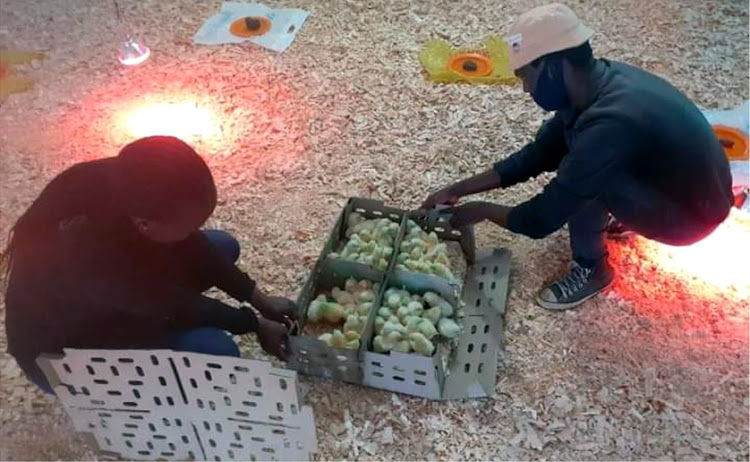 Hard at work are Emeldah Tsehla and Jeff Mabowa who are directors of the Tsoga Mshongo Farmers Primary Cooperative.
Image: Supplied.

Five enterprising youngsters in Ga-Rantho in Limpopo have established a broiler chicken farming venture to alleviate poverty and fight youth unemployment in their community.

Tsoga Mshongo Farmers Primary Cooperative was founded by five young people between the ages of 25 and 29.

The cooperative was registered in 2019 and is the only business that sells chickens in Ga-Rantho village and surrounding areas.

Speaking on behalf of fellow co-founders, Tiishetjo Maimela (25) says the idea to start the cooperative came as a result of learning through social media how other young people were succeeding in running broiler chicken farms.

“We saw it as a great opportunity because there is no other poultry farm or business in our community,” she explains.

Maimela says after registering the cooperative she and fellow members approached the National Youth Development Agency branch in Groblersdal and asked for support.

They were offered cooperative governance training and received a business grant worth R50 000 to start the farm.

“With the grant money we managed to build a structure for the chicken house and buy feeds, broilers and medications. We started off with 300 broilers and 250 chickens,” she says.

She adds that the cooperative has managed to sustain itself so far and it is now on its third batch of chickens since the business started over four months ago.

In addition to creating jobs for themselves, the entrepreneurs believe a project such as theirs could help fight food insecurity and poverty in many rural areas.

Maimela says due to the second wave of the Coronavirus they were unable to attend further training on how to improve their business knowledge. At the moment, they rely on information they find online.

To get hold of the cooperative, email: mshongofarmers25@gmail.com

A group of elderly farmers from three Limpopo local municipalities are learning new practical farming skills, thanks to the Farmer Field School ...
SebenzaLIVE
2 months ago

Helping farmers to vaccinate their livestock

Vaccinating livestock is important to prevent animals from being infected with deadly diseases and to sustain productivity.
SebenzaLIVE
2 months ago
Next Article