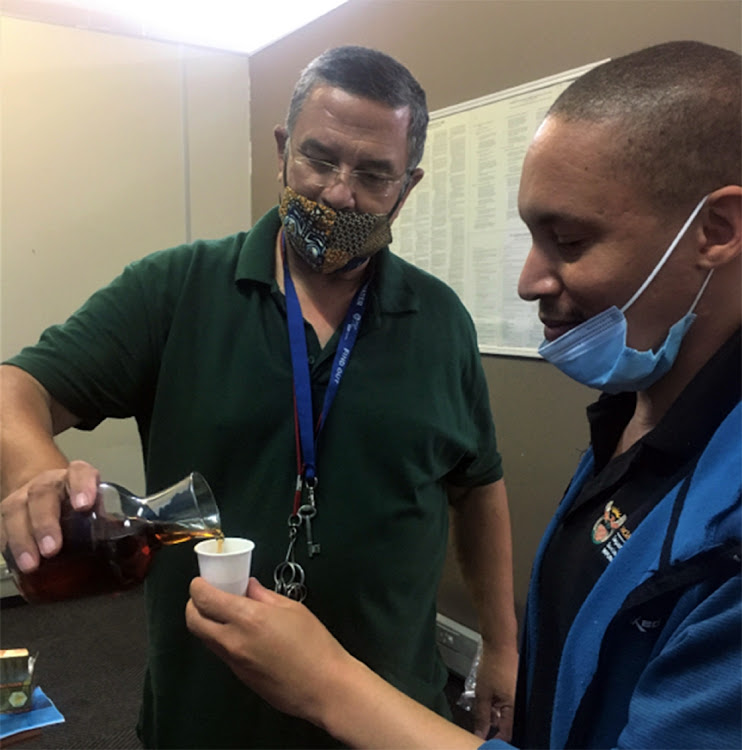 Members of the Western Cape Honeybush Tea Cooperative enjoy a cup of the honey bush tea they produce.
Image: Supplied

The Western Cape Honeybush Tea Cooperative is putting SA on the global map as a top tea producer.

The five-member cooperative (WCHTC) is exporting its tea to Switzerland and China, the world-renowned tea producing country.

Honeybush tea is a uniquely South African herbal tea as it's made from of a shrub that grows exclusively in the fynbos regions of Eastern and Western Cap. Honeybush is therefore related to rooibos, but belongs to Cyclopia species while rooibos is of Aspalathus linearis species but both belong to Fabaceae family of plants, commonly known as the legume family.

Chairperson of the cooperative, Howard Barends, says they plant their honeybush in the mountains around Oudtshoorn.

“To ensure that our tea is of the highest standard, we harvest it in the early hours of the morning, when it still has moisture,” he says.

The tea is processed at the WCHTC’s factory, where it goes through a boiling process before being sweated for three days. It is then dried for another three days.

“When we dry the tea, we turn it over every three hours to get the right colour and taste for the whole tea. This whole process takes about a week to complete and must be done right all the time,” says Barends.

The cooperative was registered in 2016 by Barends, his brother James, Ferdinad Hector, Raoul du Toit, Channon Hector and Frederick Schroeder.

Barends says though the tea-making company had been in existence for 20 years, they had chosen to register the cooperative to develop the community.

“When we registered the cooperative, we wanted to use the business to help develop the community of Oudtshoorn. It was easier to do this as a cooperative than when we were a private company. We also roped in people with the right skills for our cause.”

The WCHTC has started a trust that pays for the higher education of its 52 employees’ children. The cooperative has received R200,000 in funding from the National Development Agency (NDA). The funding will be used to purchase a tea bag packaging machine.

Women entrepreneurs have another excellent platform to grow themselves and their businesses, through a new initiative launched by the department of ...
SebenzaLIVE
1 year ago

CSIR teams up with healers to develop safe traditional medicines

For many years, Africans have relied on traditional medicine for healing, despite the dominance of Western medication. South Africans are no ...
SebenzaLIVE
10 months ago
Next Article