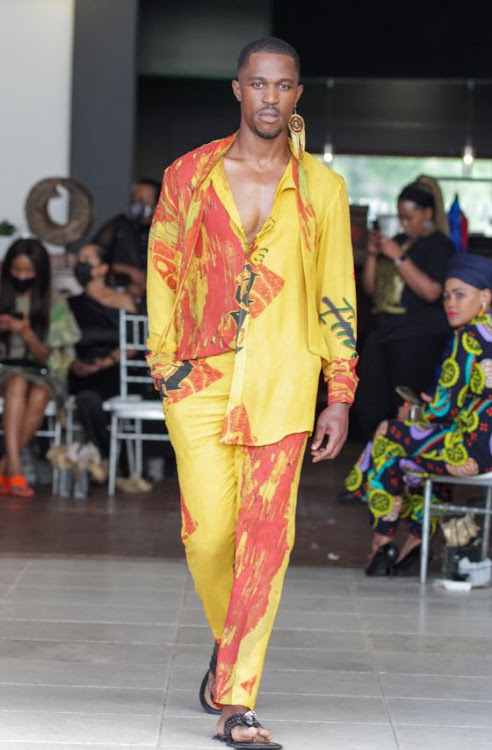 On the other hand, I happen to be terribly early to the party. Turns out leaving home very early on a Saturday afternoon, in an attempt to beat the ill-famed Midrand traffic, was premature.

DT, as he's affectionately known to his close circle, welcomes me at the entrance of Riboville Boutique Hotel with a warm hug. He is sporting his trademark dark sunglasses and dressed head-to-toe in black. The draped oversized coat he's wearing is doing exactly what it's supposed to do – creating a spectacle every time he lifts his hands.

When I quip that “his show is late as usual”, Tlale retorts by pointing around that “they are late, not me”. He’s referring to the decor staff frantically setting up.

Midrand traffic is not the only thing that has cleared. After two days of torrential showers, the skies have opened up so Tlale can debut his spring/summer 2021/22 collection themed “I’M M’I [GRAY]-TION”.

“I’M M’I [GRAY]-TION titles this collection as an embodiment of the black immigrant caught between black, white, and grey lines where the black and white lines are made up of political, biased and violent impacts on both the past and current systems of segregation,” read the invitation when it arrived in the mailbox three days before the show.

“The grey lines have become a part of our future and our uncertainty thereof. This has inspired us to re-write our ancestors' woeful history and become their wildest dreams.” 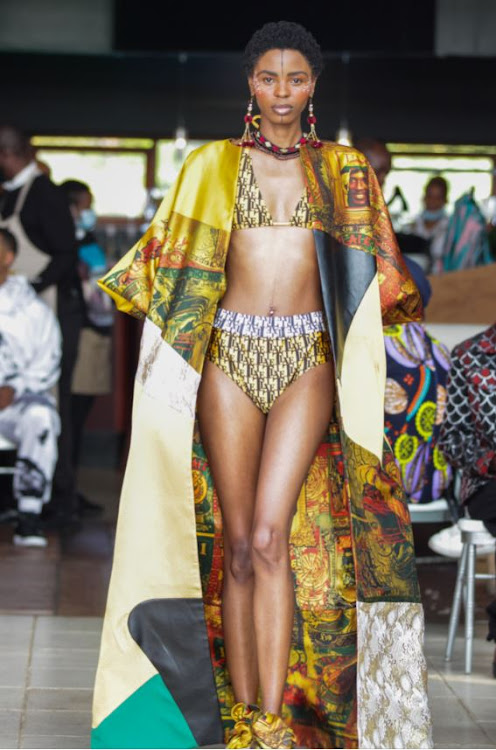 In hindsight, the tangerine tone of the invitation card was the biggest clue to the vibe of the show. When models strut their way down the ramp, they open with honey layers that then advance to fiery orange hues. Creamy whites serve as palate cleansers halfway through the show, before the show climax into shades of blue.

The DT woman is transparent this season, with daring mesh maxi numbers, see-through skirts and sheer floral get-ups. Menswear is relaxed with oversized kimonos styled with drop-crotch trousers. Accessories include silk satin scarves and duster shoes that will shine any floor surface spotless.

But the real drama is at the end with balloon silhouettes, feather finishing and risqué front skits.

Tlale collaborated with Zimbabwean-born and SA-based contemporary painter Mandla Mavengere, who curated artwork to complement the fashion. The 29-year-old first met Tlale on Instagram at the beginning of the year and before long he visited Mavengere’s studio in Constitution Hill, Johannesburg. They hit it off.

“I have been thinking about tapping into the fashion side of art since 2018. It wasn’t easily straight forward. We had to learn each other’s concepts, but also the authenticity of the work and the integrity we carry in our craft. It took a while to find common ground, because we are worlds apart,” Mavengere said.

“We did a lot of experiments. This show was more of an introductory experience and I had to learn that our collaboration is not going to be once-off. But it’s going to be a series delivery and unpacking what we conceive as a duo. I’d say the first one is a partial delivery.”

The multi-hyphenate media personality let's us in on her fun-filled lifestyle.
S Mag
1 month ago

The media personality and businesswoman continues to drip in her African butter even across our shores.
S Mag
1 month ago

5 best dressed at the Dolce and Gabbana show in Venice

The prestigious fashion show that took place in Italy saw in attendance celebrities who were dressed to the nines.
S Mag
1 month ago
Next Article