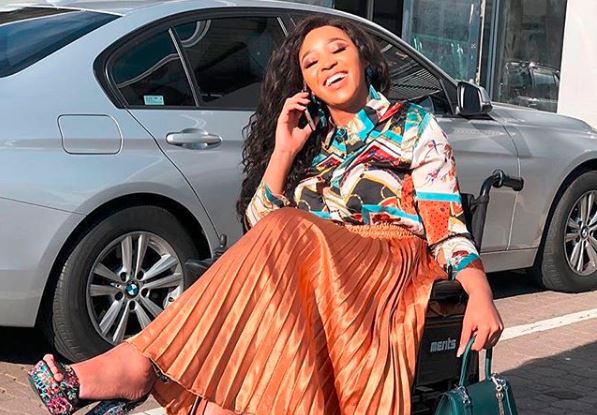 While the internet was mourning the "end" of Itumeleng Khune and Sbahle's relationship anew, following snaps of Itu and his new bae, many have flocked to the fitness guru's social media pages to see what she's been up to - and, well, moghel is living her best life!

Itu nearly crashed the internet over the weekend when he posted snaps of himself with a new flame, alongside the caption "blessed".

Angry fans accused Itu of giving up on "sick" Sbahle, while others claimed it was his life to decide on who to date.

Others suggested that Sbahle had forgotten the football star after suffering amnesia in the wake of a horror car crash and he had supported her through her recovery. A claim retweeted by Itu.

Away from the net, and fresh off news that the National Prosecuting Authority had dropped reckless and negligent driving charges against her following the accident, Sbahle was nothing but jolly this past weekend as she celebrated Shauwn Mpisane's birthday.

If you think about it though, Sbahle and Itu haven't been a thing in a while and even though tweeps had to deal with those feels again, both parties (Sbahle and Itu) can't be expected to be in the same state - the speculation over their breakup.

Plus the Kaizer Chiefs goalie wished Sbahle well after their breakup, responding with a praying hands emoji to a follower's message wishing her happiness after the pair's split.

So how is Sbahle holding up you ask? Sis is beautiful, graceful and just outchea being grateful for life and its blessings.

These snaps below say as much!

We continue to celebrate my mums birthday month because after everything she has done for us all, she deserves more love ❤️#celebratingshauwn

Plus even though she's not fully recovered, she's made enough strides to be able to do a young "shaku shaku" move when a great song plays.

Just look at her and her siblings dancing.